Home / Latest / A contribution towards a programme for the arts

History is about to accelerate. The world financial crisis broke a decade ago. Like car crash victims dazed by the impact, the working-class, poor and young people who continue to suffer have had little coherent response, largely due to the lack of bold leadership needed from trade unions and many other workers’ and left organisations.

But now, mass sentiment for an alternative to the capitalist system which caused the crash is emerging. New political movements have developed – looking to Bernie Sanders in the US, Jeremy Corbyn in Britain, Jean-Luc Mélenchon in France, AMLO in Mexico. Social movements for women’s rights and against profit-driven austerity. Workplace battles too, against redundancies, low pay, casualisation, high workload and outsourcing.

Meanwhile, scuffles break out in the ranks of the bosses’ politicians and institutions – Trump’s trade threats, Britain’s Brexit negotiations and more.

There is an opportunity to significantly step up the process towards breaking up the old capitalist order. To install a system that works for the working and middle classes, young people and the poor – and for artists, and those who want to take part in the arts.

The Bad Art project fights for socialism: a world based on public ownership, and democratic planning of production, distribution and exchange to guarantee plenty for all. We believe that only socialist revolutionary change can achieve this in full and forever.

Eighty years ago the world was entering another great opening. Then, too, there was a gap between what was necessary to defeat capitalist catastrophe and workers’ general political understanding.

However, in that period of revolution and counterrevolution, class consciousness and broad socialist understanding was at a higher level than today in most of the world. As part of this,  the Third International, despite having become an instrument of Stalin and the bureaucratic elite in the Kremlin, was a big pole of attraction to workers and left-moving artists and intelligentsia everywhere, due to the authority of the Russian revolution. However, the newly founded Fourth International, representing genuine revolutionary socialism and workers’ democracy, was also a pole of attraction to the most politically advanced workers and middle-class layers appalled by the Stalinist dictatorship as well as by capitalism and fascism.

It was in this context that Leon Trotsky, co-leader of the Russian revolution, drafted 1938’s ‘Manifesto: Towards a Free Revolutionary Art’ – aimed at the best class-conscious artists and writers, and a section of the intelligentsia, as well as workers and youth interested in the arts.

Of course, like Lenin’s Bolsheviks had, Trotsky’s Fourth International aimed to articulate and link up the desires and demands of workers in a way they all could comprehend and organise struggle towards. Its goal was to draw all combative workers, whether convinced of revolution yet or not, into the conflict with capitalism. But there was also an opening to win artists to this struggle.

Artists inspired by the revolutionary promise of 1917 were rightly repulsed by the stifling growth of Stalinism which imprisoned the arts in bureaucracy-sanctioned style and content. Some were attracted, therefore, to Trotsky’s principled struggle.

This declaration aimed at a part of the intelligentsia outraged at the suffocation of the arts by fascism on the one hand and Stalinism on the other. “Every progressive tendency in art is destroyed by fascism as ‘degenerate’. Every free creation is called ‘fascist’ by the Stalinists.”

The Manifesto sought to organise this anger; to “find a common ground on which all revolutionary writers and artists may be reunited, the better to serve the revolution by their art and to defend the liberty of that art itself against the usurpers of the revolution.”

The Bolsheviks had understood well the value of art to society – recounted in ‘A bright blast of hope: revolutionary Russia’ in the 2017 issue of Bad Art. And Trotsky himself had a great interest in and critical appreciation of art and had written on literature and other artistic subjects – see ‘The social roots and the social function of literature’ in the 2016 issue of Bad Art.

So, along with the French surrealist André Breton and the Mexican muralist Diego Rivera – Trotsky’s host in exile in Mexico – he drafted the Manifesto. This appealed to artists to join the struggle against both Stalinism and capitalism. “Our aims: the independence of art – for the revolution. The revolution – for the complete liberation of art!” We also reprinted this in full in the 2017 issue of Bad Art, along with a more detailed examination of its historical context.

The situation today is different. Artists still form a section of the intelligentsia, but in comparison to 1938 artists come from – and stay or end up in – many different backgrounds. No longer are they drawn solely from the middle and upper layers of society. There has always been ‘folk art’, of course. But the person who lives, or desires to live, from or for the arts, appears more and more in the ranks of the working class.

And furthermore, there is a memory in the advanced capitalist countries of the long post-war capitalist economic boom, and the reforms workers’ struggle won during it. That was a period when working-class and young people had the time, facilities and financial support to pursue some kind of artistic life, perhaps the major factor in artists appearing from and in all class backgrounds. The destruction of that promise before the eyes of us all is leading to huge frustration.

But there is also no world organisation today with the revolutionary authority of Leon Trotsky or the Fourth International which can appeal directly to those artists who do still exist in the upper layers of society – let alone the mass of working and middle-class artists. To reach and organise the artists – and the arts lovers in the working class – requires more than a declaration for artistic freedom. We need a programme.

In 1938, Trotsky also drafted ‘The Death Agony of Capitalism and the Tasks of the Fourth International’, commonly called the ‘Transitional Programme’, as the Fourth International’s core raft of demands. The approach of these ‘transitional demands’ was to take the demands which arise from workers’ daily struggles, and link them to each other and the struggle for socialism. To explain why this struggle is necessary, how workers can win it, and so draw them into it.

With all of this in mind, Bad Art proposes here some headline transitional demands: a contribution towards a programme in the arts. These demands are not a finished programme for the arts, but a first step in a discussion in that direction. And they should only be seen in the context of a general transitional programme for socialism.

2018-08-13
Rob M
Previous: Victory! Great Exhibition of the North – no to arms, yes to arts!
Next: Musicians deserve pay for streaming our work! 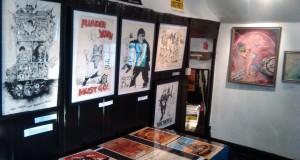