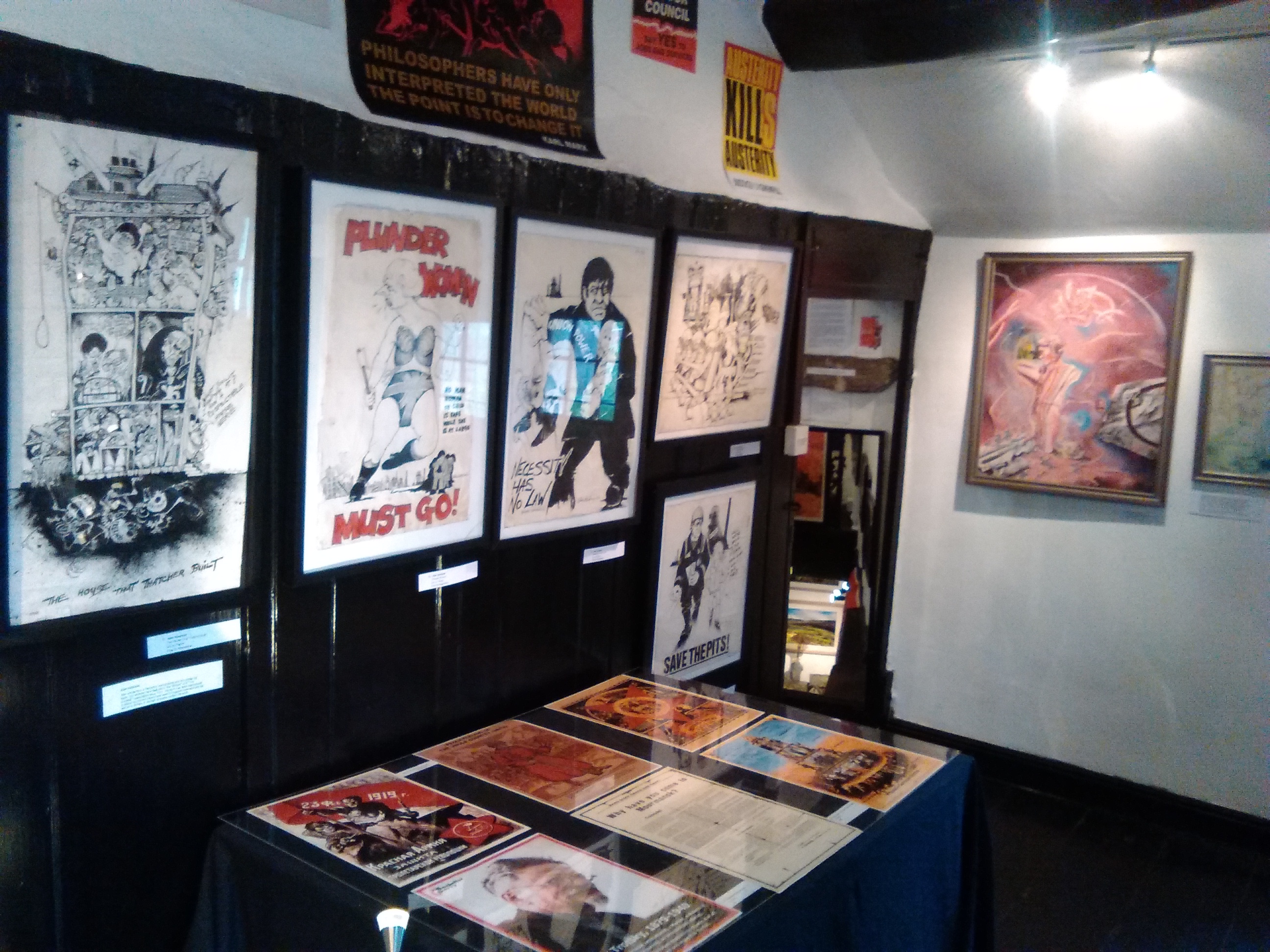 In the last week of February 2018 I was invited in my capacity as northern England coordinator for the Bad Art project to speak at three separate meetings. These were in Huddersfield, West Yorkshire; Moston, north Manchester; and Liverpool.

All the meetings were advertised as a Marxist artist from Bad Art who would explain not only the project’s objectives but also how its aims link directly to fighting back against the impact on the arts of ongoing austerity cuts. This was with particular reference to northern England working-class communities.

The first event in Huddersfield was organised by the Socialist Party. This meeting took place at a time when the local Labour council, with £120 million in reserves, was scandalously putting through policies involving cutting jobs and public services.

At this meeting I said the creative arts industries earn the UK economy £10 million an hour, according to the government’s own figures, and employ nearly two million people.

And yet despite massive profits being made by big business owners, the vast majority of those employed in the industry earnt, according to a survey of its members by Artists Union England, less than £10,000 per year – or less than two-thirds the average wage. Many had to work for free at some time, and still a large proportion of these artists and other workers in the industry worked without employment contracts.

Compounding this problem is a regional imbalance in arts funding. £69 per person is invested in the arts in London, compared to under £5 in other regions, according to the 2013 report ‘Rebalancing Our Cultural Capital’.

The comments from the audience detailing how cuts had impacted them in regard to the arts and their communities were shocking!

One young woman explained how the parents of youngsters in nurseries were being asked to pay an extra £10 per week to provide paper and crayons for the children to draw on! Her partner pointed out that despite his love for listening to music, after a hard working day on building sites, in the evening, he was just too tired to function.

One local school was actually charging its pupils to study GCSE art. Another student pointed out that as well as his £40,000 debts on leaving university, his involvement in a band had to end because they had nowhere they could rehearse.

There were many other comments. Music lessons are not now taking place in schools. Car park prices and entrance fees are so high that pensioners and those on low incomes cannot attend local exhibitions. Art resources are too costly to buy. Vitally needed creative courses used in therapy have been stopped. And the stresses and strains of everyday life are destroying any effort at personal creativity, such as writing poetry.

What was clear throughout this meeting was how the arts, in many differing ways, are an essential part of enriching working class people’s lives. There was an excellent and positive response to the ideas put forward by Bad Art for bringing together artists, trade unionists, community groups and others wishing to defend the arts, whether as spectators or creators.

Our call for opposition to cuts in the arts to be linked to fighting back against cuts and privatisation generally, and the need to fight for bold socialist policies both locally and internationally, was also enthusiastically received.

There was a similar response at the Moston Miners Community Arts Centre. This was a public event organised as an ‘Art of Resistance’ evening. I was invited to speak first to the audience before local bands, spoken word artists and videos.

I laid out Bad Art’s reasons for being formed and some of the actions we propose. But here I focussed on the importance of artists joining up and linking their struggles with the labour and trade union movement.

I explained that artists getting involved in socialist politics must not mean any sort of censorship or interference in their creative actions. Here I was able to highlight in the most recent Bad Art journal Trotsky’s ‘Manifesto: Towards a Free Revolutionary Art’, written in 1938. In it he states: “The revolution must build a socialist regime with centralised control – but to develop intellectual creation an anarchist regime of individual liberty from the first should be established.”

I explained that austerity measures are an unnecessary political act carried out by the Tories and right wing of Labour that indiscriminately penalises working-class communities in order to benefit the profits of a few. In other words to prop up capitalism.

I contrasted the billions of pounds that have been paid to bail out the bankers, or on nuclear weapons, and how despite Theresa May saying there is no “magic money tree,” she had found £1 billion to bribe the reactionary Democratic Unionist Party to prop up the Tories’ minority government.

I also pointed out the millions of pounds in corporation tax that major companies had not paid, and how the NHS is being fleeced by private business interests. In other words, the money is there, but we need a different sort of system, democratically planned to meet the majority of people’s needs not maintain the wealth and privileges of a tiny few.

This theme continued at the Socialist Party-organised meeting in the 2008 European Capital of Culture, Liverpool. Here the discussion became very extensive and wide-ranging.

Once again the prohibitive museum and gallery entrance fees were commented upon, both in Britain and abroad, which effectively prohibit, working-class people from attending. The absurd situation of the British Royal family owning millions of pounds’ worth of art collections never made available for the public to see was also highlighted.

Younger and older workers pointed out how austerity had severely impacted on vital social provisions, making life so much harder for those at the sharp end. This was shockingly evident on one of the coldest nights of the year, with snow falling, where we saw so many homeless people begging on the streets or making cardboard homes or tents on derelict land.

Despite many well-meaning music festivals and the like held to “raise awareness” about such issues as global warming, world poverty, Aids and racism, these problems are still occurring – because the root cause, capitalism, has not been addressed.

The discussion also ranged over topics such as what is art? What is an artist? Is there such a thing as working-class art?

But my concluding points were that – as artists such as grime musician Stormzy are starting to understand – the numerous strikes and other battles waged by artists and cultural workers around the world show the battle to defend the arts is indisputably political.

The fight to defend our communities against austerity requires united action from workers and young people including artists, trade unions, community campaigns and socialists. The importance of building mass parties of the working-class with socialist policies becomes even more vital if we in Britain and internationally are to open up the arts and provide the resources, time and materials required for all to fully embrace them, whether as participants or spectators.

Art should enrich all of our lives, not just the wealthy few who have commodified creativity to be bought and sold. Bad Art’s message was enthusiastically embraced by all those who attended these successful meetings. It’s a great start and a positive pointer to action in the future.

Peter Harris is a surrealist artist and retired teacher based in Lancashire, northern England.