Home / Latest / An introduction to the Manifesto: Towards a Free Revolutionary Art

An introduction to the Manifesto: Towards a Free Revolutionary Art 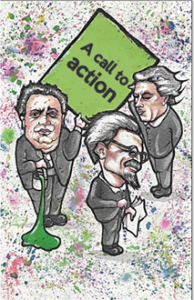 A call to action!

They met in Mexico, 1938. Leon Trotsky, co-leader of the Russian revolution, André Breton, co-founder of the Surrealist movement, and Diego Rivera, revolutionary Mexican artist and activist. Together, they formulated the ‘Manifesto: Towards a Free Revolutionary Art’. Trotsky, in exile and hunted by Stalin’s agents, was the main author, Breton and Diego its signatories.

The manifesto was a call to arms, pens and brushes, addressed to radical artists and writers. It denounced fascism and Stalinism, two dictatorships suffocating artistic expression as they were drowning workers’ opposition in blood. It was also a comment on the role of art and culture in class-based society.

But what had brought these people together at this particular moment? This was a time of extreme turmoil, the world on the brink of a second global war. The international capitalist economy was in severe crisis. Fascism had risen to power in Italy, Portugal, Germany – and Spain, where the revolution had been recently defeated. Mass uprisings had taken place in France, the US, China and around the globe.

Joseph Stalin was consolidating his grip on power in Russia, with show trials dispatching revolutionary socialists and other militants to forced labour camps in their hundreds of thousands. The ruling Stalinist bureaucracy and its ‘Communist International’ were tightening their control on the so-called ‘communist’ parties around the world. In Spain that had meant playing a consciously counterrevolutionary role, betraying the workers and peasants in the socialist and anarchist movements.

In 1938, Leon Trotsky and other revolutionary socialists launched the Fourth International – in recognition that Stalin’s Third (Communist) International would never again play a revolutionary role. This was a time to take sides. Any activist worthy of the name would have to ask themself: Do I support capitalism, Stalinism, or those fighting both?

The Stalinist bureaucracy around the world forced artists, writers and workers into a cultural straitjacket – see ‘Twin pincers of counterrevolution’ (page 10).

Breaking with Stalin and the ‘communist’ parties, however, involved the loss of powerful patronage, as they controlled a huge apparatus and influence over the intellectual scenes of many countries.

‘Towards a Free Revolutionary Art’ was completed on 25 July 1938 and published in the autumn edition of the New York literary magazine ‘Partisan Review’ over the signatures of Diego Rivera and André Breton. It is reprinted in the collection of Trotsky’s writings ‘Art and Revolution’. In his 1953 essay collection ‘La Clé des Champs’ (published in English as ‘Free Rein’) Breton explains that Trotsky was the main contributor.

The wide-ranging manifesto outlined the crisis facing civilisation – not only the approaching world war, but generally. Against this backdrop, the position of artists and scientists was intolerable as they were shackled to the requirements of the various ruling classes and elites.

Therefore “true art is unable not to be revolutionary, not to aspire to a complete and radical reconstruction of society. This it must do, were it only to deliver intellectual creation from the chains which bind it, and to allow all humankind to raise itself to those heights which only isolated geniuses have achieved in the past. We recognise that only the social revolution can sweep clean the path for a new culture. If, however, we reject all solidarity with the bureaucracy now in control of the Soviet Union, it is precisely because, in our eyes, it represents not communism but its most treacherous and dangerous enemy.”

The manifesto explained the role artists could play in exposing the real nature of these systems. It rejected controls on artistic expression: “In the realm of artistic creation, the imagination must escape from all constraint and must under no pretext allow itself to be placed under bonds… and we repeat our deliberate intentions of standing by the formula: complete freedom for art.”

In the years immediately after the Russian revolution, Trotsky was one of the main organisers of the new workers’ state. He consistently defended the need for artistic freedom. Again, the manifesto touched on the attitude a genuinely democratic workers’ state should take: “If, for the better development of the forces of material production, the revolution must build a socialist regime with centralised control, to develop intellectual creation an anarchist regime of individual liberty should from the first be established. No authority, no dictation, not the least trace of orders from above!”

Artists of the world, unite!

It was not, however, simply an analysis of the situation at the time. This was a manifesto, a call to action. So it included a section on to how to build this international movement.

“We know very well that thousands upon thousands of isolated thinkers and artists are today scattered throughout the world, their voices drowned out by the loud choruses of well-disciplined liars. Hundreds of small local magazines are trying to gather youthful forces about them, seeking new paths and not subsidies. Every progressive tendency in art is destroyed by fascism as ‘degenerate’. Every free creation is called ‘fascist’ by the Stalinists. Independent revolutionary art must now gather its forces for the struggle against reactionary persecution.”

The manifesto is a remarkably succinct treatise on the relationship between art, class-based society and dictatorship. Although set in a particular period of acute worldwide crisis, it also serves as a general Marxist approach to art and culture.

Its publication was followed by the setting up of an embryonic revolutionary artists’ organisation, ‘Fiari’ (la Fédération Internationale de l’Art Révolutionnaire Indépendant – the International Federation for Independent Revolutionary Art). The potential was there, but in the polarised political situation immediately preceding the Second World War, Fiari was unable to gain ground and build a mass presence.

Towards an artists’ international

With the 80th anniversary of the publication of the Manifesto: Towards a Free Revolutionary Art approaching, it is high time to starting outlining the sort of modern manifesto and independent artists’ movement needed today. Bad Art is an attempt to contribute towards the first steps in this direction. There are similarities and also differences between today’s situation and that in 1938. But most important is for artists and workers to link up internationally, to discuss the way forward and begin to fight for it.

The world was hurtling towards another devastating world war in 1938, with grave consequences for culture – and even civilisation itself, as graphically outlined in the manifesto.

“We can say without exaggeration that never has civilisation been menaced so seriously as today. The Vandals, with instruments which were barbarous, and so comparatively ineffective, blotted out the culture of antiquity in one corner of Europe. But today we see world civilization, united in its historic destiny, reeling under the blows of reactionary forces armed with the entire arsenal of modern technology. We are by no means thinking only of the world war that draws near. Even in times of ‘peace’ the position of art and science has become absolutely intolerable.

“In the contemporary world we must recognise the ever more widespread destruction of those conditions under which intellectual creation is possible. From this follows of necessity an increasingly manifest degradation not only of the work of art but also of the especially artistic ‘personality’.”

We are not on the threshold of world war today. But devastating regional wars rage in the Middle East and North Africa, including direct Western imperialist intervention. In today’s global capitalism, wars in one part of the world have a direct effect in other parts, including Europe, with terror attacks, the refugee crisis and so on.

Art is not under the iron cudgel of fascism in the West. But there is a deepening crisis in the state of culture under this rotten, senile capitalist system.

Just as Trotsky gave big importance to the role of artists and writers in the revolutionary struggle to change society, so Bad Art strives to do the same today.

We need to start to outline a programme that can unite artists today. In the first edition of Bad Art, in 2016, we proposed three key demands – access, freedom and organisation – as a framework to help develop the discussion. As networks and links with others grow, artists will need to start developing a more detailed programme – a manifesto for today.

We believe this will need to include demands for collective ownership and democratic control of access to art and the means of creating it. This includes museums, galleries, historical works – and investment in public workshop, rehearsal, performance and exhibition facilities. The question of collective ownership touches every question that faces artists, including the use of public space and cost of materials. If workers and artists do not own the art world, it is not ours to use.

In every area that Bad Art’s supporters work, we aim to develop demands and strategies linked with improving the concrete conditions we face. Art for many is not a hobby, it’s a vocation, it’s a livelihood – so why should we work for free?

All these questions need tying together in a modern manifesto for free, revolutionary art. We invite you to study the past with us, in order to help determine the future.  We need, above all, to win artists today to the idea that capitalism offers no solutions to humanity’s problems, and that our destiny is bound up with that of the working-class movement.

After all, real art is always revolutionary by its very nature. Genuine art will oppose tyranny in all its forms, be that from big business, the state, organised  religion, or anything else – but above all, the dictatorship of the capitalist system which dominates world and human relations, materially and spiritually.

In doing so, revolutionary art, as Trotsky argued, should defend the historic conquests of art and culture against the threat posed to them by the decay and degeneration of the old world. Revolutionary artists will be to the forefront of the struggle for a new society: a socialist society.

The final lines of the 1938 manifesto sum up our general approach.

The independence of art – for the revolution

The revolution – for the complete liberation of art!