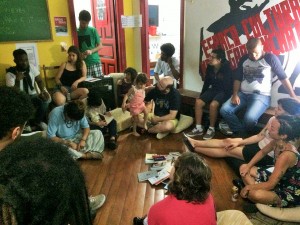 On Saturday the 18th of November our culture collective held its first event called “Art in Times of Crisis”. It aimed to, in part, commemorate the 100 year anniversary of the Russian Revolution and to discuss how the lessons of those events can help artists organize and resist now in the current global political and economic crises.

The event opened with a debate discussing these questions with some invited quests starting things off. Diane Padial spoke about her experience with Sarau Do Binho, one of many poetry recital groups currently happening in the peripheries of São Paulo, and the struggle entailed in making these events happen; Carolina Teixeira Itzá, who is a graffiti artist and also part of the collective Fala Guerreira and finally our very our Tatiana Minchoni who presented BadArt, what it is about, what the world tour is and what we are trying to achieve with the formation of this collective here in Brasil and Latin America. The discussion then slowly transformed into a Sarau (poetry reading) where people read poems they had written or had brought with them.

The event was a great success with around 30 people attending throughout the night. They where from diverse backgrounds with some from different left organizations and from all over São Paulo. The event itself was hosted in Espaço Cultural Mané Garrincha that is a left wing open cultural space in the centre of São Paulo that has rooms for discussion, marxist study groups, events and a marxist library. We sold food and beer and the events carried on late into the night. This was an important start for our collective and has began a dialogue with artists, writers and poets from São Paulo.
Tatiana Minchoni

2017-11-28
Rob M
Previous: Russia’s TV drama ‘Trotsky’: History? Haven’t heard of it
Next: #BadArtWorldTour a big success at a time of growing ferment