The latest smear on the Russian revolution comes from Russia itself. Russia’s Channel One is broadcasting an eight-part drama on the life of Leon Trotsky. It depicts him as a sexist, bloodthirsty gangster. It portrays the countless, nameless, self-sacrificing worker-revolutionaries who fought the dictatorships of the tsar and the capitalists as drunken idiots. Lev Sosnovsky reviews ‘Trotsky’. Translated by Philip Snyder. 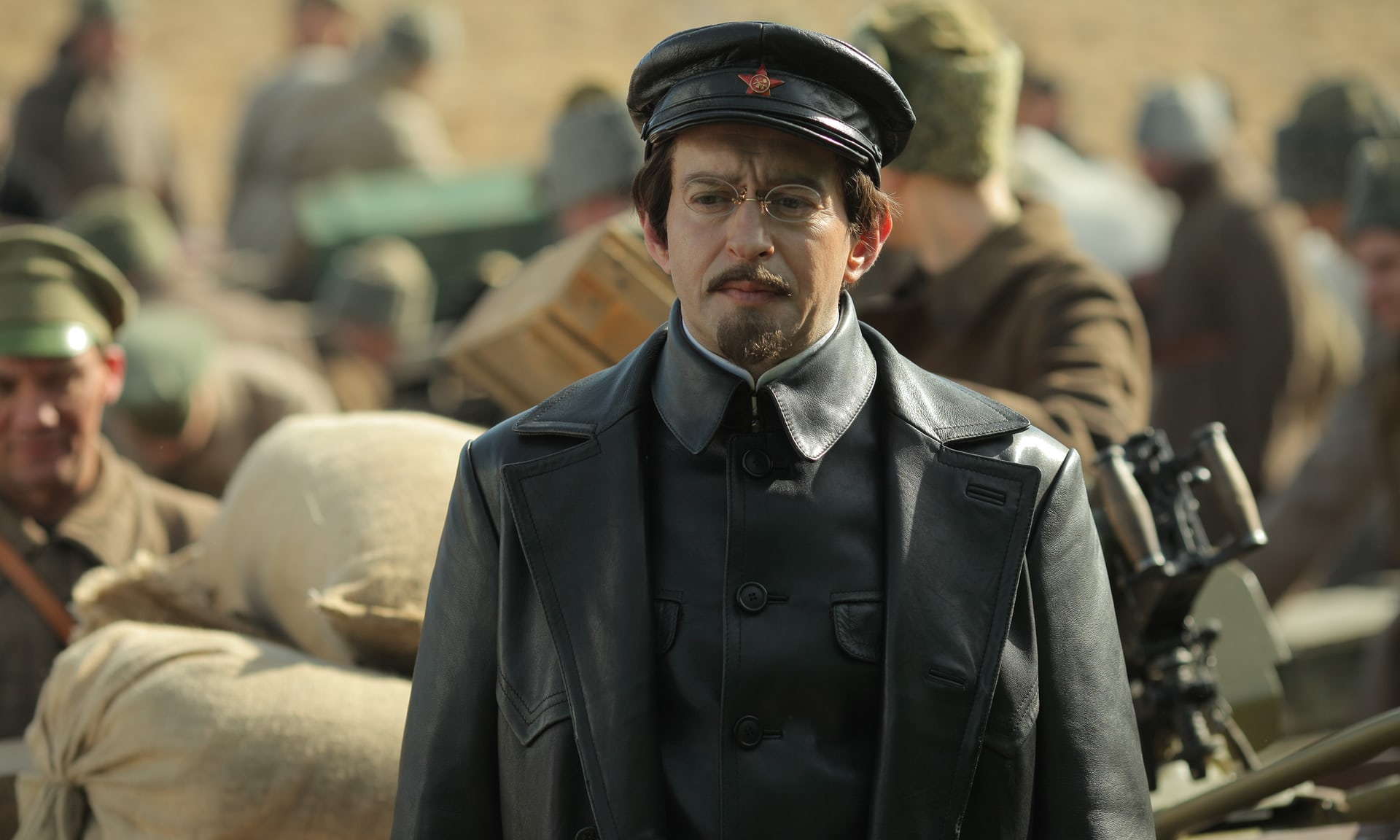 How does the Kremlin’s army of intellectuals see the revolution?

“He was a person with great vitality and boundless energy. If we were to look for an actor to portray Trotsky, the only one who could play the role really well would be Kirk Douglas (laughs). Douglas has that drive that was typical of grandfather… He had an absolute faith that socialism would determine the future of mankind. He had no doubt. But the clock of history moves more slowly than one would like. A human life is very short compared to the historical cycles.”

Writers for the new drama ‘Trotsky’, which premiered on Russia’s Channel One for the 100th anniversary of the Russian revolution, made one significant mistake.

That is, they forgot to include a disclaimer – like the one often seen at the beginning or end of films – indicating a certain separation from reality. Something like: “This is a work of fiction. Any resemblance to actual persons, living or dead, or actual events, is purely coincidental.”

The series may have been more bearable with that in mind, perhaps even overpowering the urge to pick up something heavy and smash a hole through the screen.

In fact, this series plays out the Stalinist version of Trotsky’s death, as described by the Soviet press in August of 1940: “Trotsky died in a Mexican hospital from a fractured skull – the result of an attempted assassination by one of his closest associates…

“Entangled in his own networks, Trotsky reached the limit of human degradation before being killed by one of his own supporters…

Unfortunately, we can’t subject this series to the rigours of historical criticism due to the absence of any history as such in it. Any consistent approach at historical criticism would be a voluminous effort, and for that there are already better resources in existence.

Indeed, for those who wish to learn the real history, it would be best to forget the series as any sort of historical record and read, for example, Trotsky’s autobiography, ‘My Life’, or any of the serious literature about the revolution.

Despite the fact that, as already mentioned, this series is taking place in a parallel universe, it can’t be called a work of fantasy.

As a popular Russian internet critic says, it is not “fantasy,” but “fantasia” – that is, a superficial entry into the popular genre, the plot of which falls apart at the first look. Characters appear and disappear as deus ex machina – or, if you prefer, like a Jack in the Box – solely at the whim of the authors, forcing the viewers to ask themselves: “wait, what was that now?”

The problem is that the writers are attempting to tackle a subject they don’t understand. They see the Petrograd Soviet, the Bolshevik Party, the Military Revolutionary Committee, and even the revolution itself as mere words, completely devoid of meaning.

For example, the drama’s bizarro-Lenin reproaches bizarro-Trotsky for having seized power for the party. But we are never shown the context behind this exchange, or the party itself for that matter.

Instead, we are shown bizarro-Lenin talking in front of a congress about the need to overthrow Plekhanov, but the viewer will remain completely bewildered – who are all these people? Who is Plekhanov, how did he get to his position of power, and why should he be removed?

A little dirty money from foreign embassies, a pair of charismatic leaders, a crowd of drunken sailors – all this, according to the writers, is what a revolution looks like.

In fact, the authors of this series are trying to take us back to a time before the emergence of historical science, when history was depicted as a chain of actions by ‘great men’ – princes, kings, emperors, or, in this case, one or more revolutionary leaders. Even entire economic classes and nations appear as nothing more than moulding clay in their hands.

All the while, the psychological aspects of the plot are heavily indebted to a sort of pseudo-Freudianism. There are infinite interpretations of the relationship between our hero and the crowd, as well as the interrelationships between sex, violence, death, and revolution.

But this is served with an unambiguously sexist implication. The ‘masses’ are likened to a woman who does not – and by definition cannot – have her own interests. And, therefore, requires an ‘alpha male’ to make all of her decisions for her.

If you’re looking for a story with high political drama and human passions – you would be better off taking in Sartre’s play ‘Dirty Hands’. It may not be playing in Russian theatres, but is widely available in print. And, all in all, it is a much better use of time to learn about dialectics and historical materialism than it is to watch this product of Russian television.

Lenin, at different times in theatre and cinema, has been played by Yuri Kayurov, Alexander Kalyagin, Cyril Lavrov, and Mikhail Ulyanov. Like many of the late Soviet intelligentsia, they treated the Soviet regime very critically. But as artists, they could get over themselves and fully embrace the character they portrayed, creating very memorable performances.

It is a very different experience with the performances of Khabensky and Stychkin as Trotsky and Lenin. They neither rise to the level of their characters, nor hide their antipathy towards them – and, as a result, end up lowering the characters to their own level of mediocrity.

Contrary to the writers’ fervent imagination, Leon Trotsky did not betray his friend, the sailor Nikolai Markin. In fact, news of an assassination attempt on Lenin had summoned Trotsky to Moscow on the eve of Markin’s capture.

Indeed, with no shortage of falsehoods to be had, Markin is also slandered by a portrayal as an eternally drunk lowlife who would extort rubles from passers-by. In actuality, he was an educated worker – an electrician – which was one of the highest qualifications for his time.

Markin joined the Bolshevik Party in 1916, while serving as a non-commissioned officer in the Imperial Navy. He then served in the detachment guarding Lenin and Trotsky during the revolution of 1917, and frequently served as Trotsky’s proxy in the Foreign Affairs Committee of the early Soviet government.

During the Civil War, Markin was the Commissar of the Volga Flotilla, and died, heroically, in battle. As stated on the site of the Penza Museum of Local History: “On 1 October 1918, while conducting reconnaissance on the Kama River, near Pyany Bor, on the gunboat Vanya-Communist, he fell into an artillery ambush (they did not notice the disguised batter from the side of the ship). The ship was sunk. Bold and courageous Markin, who knew no fear, perished with the ship while providing cover fire for the crew members.”

Larissa Reisner, by the way, was more than a ‘glamorous young lady’. She was a journalist, commissar, and scout who repeatedly engaged the Whites in battle. She devoted a few elaborate but piercing lines to Markin:

The destroyers returned to sea long ago,

For you, the fallen crusaders, for you,

Sent an army of iron-winged blizzards.

Up, up, stiffened Markin!

Unstoppable, it joins the ocean,

The rebellious blood from your wounds …

Unfortunately, the topic is too taboo for an honest portrayal of the revolution and its leaders to be made today. Working people in Europe and even the United States are beginning to influence politics more and more – with many becoming interested in socialism. And in Russia too, young people are taking an interest in politics and marching in the streets.

The ruling class needs an ideological response to counteract the changing situation, and – with the help of a privileged intelligentsia – they are attempting to find it by smearing the Revolution and its heroes with garbage. As Larissa Reisner once wrote, “…in literature, they don’t fight about plot formation, the beauty of a syllable, the outset, or the denouement – no – they fight, first of all, about politics. Nowhere is the struggle of social forces more acute, brighter, and ruthless, than in art…”

But at times of political upheaval, such anti-propaganda can have an unexpected effect for its creators, prompting people to start looking for the historical truths of ideas, personalities, and the class struggle being represented outside of their television screens.

It’s funny that, as a moral antipode to Leon Trotsky, the writers introduced Ivan Ilyin. The reason why is clear: the heads of Channel One are well aware that this is Putin’s favourite philosopher.

Of course, they forgot to add that this ‘moral authority’ extolled fascism, having found in it a spirit “similar to that of the Russian White movement.” And even in 1948 – after all the horrors of the Second World War – he did not hesitate to write that fascism was right, because it came from a ‘healthy’ national-patriotic feeling, without which people cannot assert their existence or create their own culture.

It bears mentioning that the similarities between fascism and the Russian White Guard were noticed by the real Leon Trotsky, who warned in the 1930s that Hitler was positioning himself as the bourgeoisie’s fighter against socialists, communists and Jews on a European scale; something which impressed Ilyin.

So, Ivan Ilyin is hardly the person to teach us of the ‘humanism’ of Leon Trotsky. And if you really lay the moral responsibility for Holodomor, forced collectivisation, and the gulag on Trotsky, it is reasonable to at least be consistent and lay responsibility on Ivan Ilyin for Babi Yar, Khatyn, Auschwitz, and Buchenwald.

But what am I talking about? This is that “fantasia” mentioned earlier.

Whatever it is – for all past, present and future attempts to paint the revolution as immoral – Leon Trotsky already provided an answer in his essay ‘Their Morals and Ours’:

“Bourgeois evolutionism halts impotently at the threshold of historical society because it does not wish to acknowledge the driving force in the evolution of social forms: the class struggle. Morality is one of the ideological functions in this struggle.

“The ruling class forces its ends upon society and habituates it into considering all those means which contradict its ends as immoral. That is the chief function of official morality. It pursues the idea of the ‘greatest possible happiness’ not for the majority, but for a small and ever-diminishing minority.

“Such a regime could not have endured for even a week through force alone. It needs the cement of morality. The mixing of this cement constitutes the profession of the petty-bourgeois theoreticians, and moralists. They dabble in all colours of the rainbow, but in the final instance remain apostles of slavery and submission.”