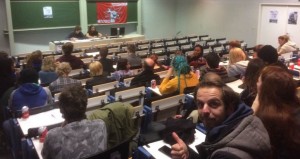 n Wednesday November 8th, the Actief Linkse Studenten organised a meeting about Art called “Art and Revolution” in Ghent, Belgium as part of #Badartworldtour  in one of the most known art school in the country.

Since it was the day after the Russian Revolution took place 100 years ago, it seemed like the right subject for the meeting. A lot of new faces showed up, all related to the arts.

To start with we had a general introduction about the position of the artist and art in a capitalist system; how the fine art market controls prices and what we perceive as good or bad, how the private market is taking over our museums, how austerity is affecting the living conditions of artists in Belgium, …

The latter is a hard one: only 1 out of 10 artists in Flanders is capable of sustaining themselves through their art, 1/3 (!!!) of all grant applications for cultural organizations were denied in 2016, 45% wants to quit making art in Flanders because of the unbearable circumstances. At the same time our military budget was raised from 2.4 billion to 5 billion euros and a total of 223 billion was lost to tax havens in 2016…

After this part we discussed the Russian Revolution. We wanted to emphasize that artists are part of the working class and we did this through explaining what the revolution meant for the arts. Examples like Malevich, Vera Ermolaeva and her Segodnia collective, UNOVIS, Varvara Stepanova and Eisenstein were given. We also explained that under stalinism the arts were again being robbed of their freedom.

The final conclusion of the introduction was that for the right of Artists to freely express ourselves, for taking art out of the hands of a wealthy elite into our own and for having the right to live as an artist, we have to organize ourselves. We need to fight for a true democratic socialist society in solidarity with the rest of the working class in order to save the arts and put an end to capitalism!!

There was a  widely engaging debate  took place in the lecture hall. Lots of the new people in the room shared their personal experiences in a political way. Around 40 people attended the open discussion which went from the need for more free spaces or studios to the need for the liberation of women in the arts, from the financial cost of being an artist to architecture becoming something only for the rich and the real estate market.

Once the debate was finished, the meeting was over so our members started talking to the new people personally. We got a lot of positive reactions from them (most of them students), it was a diverse and informative night for everybody so we’re happy !!

2017-11-14
Rob M
Previous: #BadArtWorldTour London: how the arts can help the left
Next: A world to win – Austria #badartworldtour