Home / Latest / #BadArtWorldTour London: how the arts can help the left

#BadArtWorldTour London: how the arts can help the left 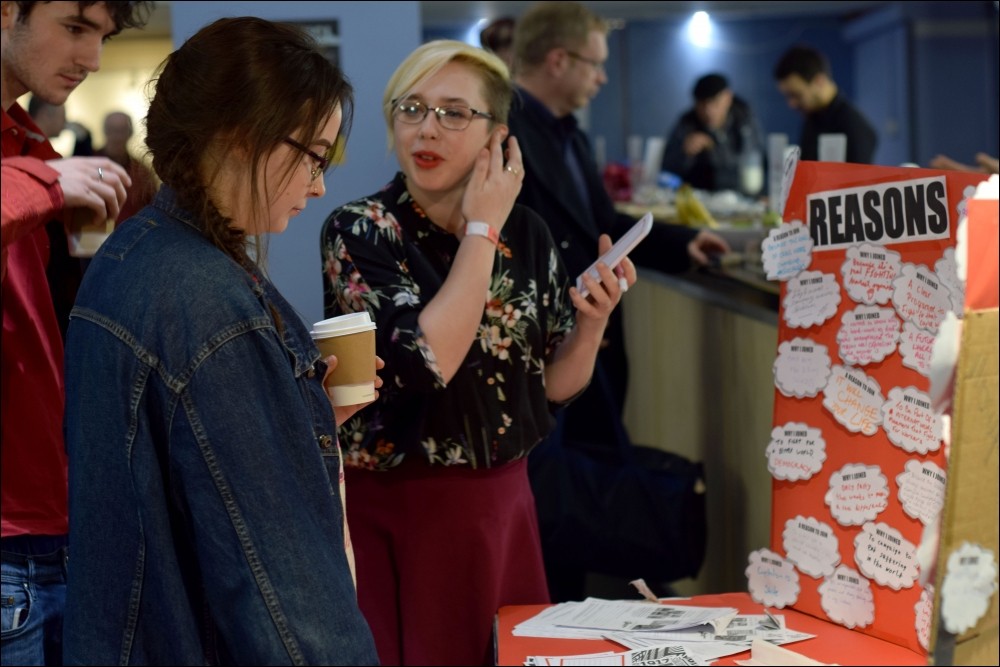 Dozens of artists and interested campaigners took part in the discussion ‘Can art and literature provide a voice for the left?’ at the ‘Socialism 2017’ event in central London on 11 and 12 November.

The session formed the London leg of Bad Art’s 2017 ‘World Tour’. Elsewhere at Socialism, an annual public weekend of discussion and debate hosted by the Socialist Party, artwork was on sale by cartoonist Alan Harding, graphic artists Sofia Wiking and Chris Bird, and photographer Mary Finch.

In the discussion, American spy writer and Vietnam War veteran Edward Wilson talked about imperialism, the importance of good stories and characters, and how seemingly apolitical artworks like Shakespeare’s Macbeth can be staged in a political way. His latest novel, ‘A Very British Ending’, is based on a real-life coup plot against British prime minister Harold Wilson’s 1970s Labour government.

Indian poet and novelist Meena Kandasamy spoke with passion, among other topics, about the oppression of women – in society as a whole, how this is reflected in art, and how it affects women working in the arts. Her latest novel, ‘When I Hit You’, is based on experience of the horror of domestic violence.

English conceptual artist Ellen Kenyon Peers talked about the difficulty young visual artists face getting their work exhibited. The major ‘Frieze’ art fair, for example, has prohibitive costs – while making megabucks for its tax-dodging owners. Ellen said we should demand Frieze be nationalised to guarantee access for all. She also talked about her experience of being victimised by the right wing of the Labour Party – for an art project which imagined how a socialist MP might act.

And Scottish singer-songwriter Elaine Mallon explained how capitalism frustrates working-class aspirations both to make and spectate the arts. She contrasted our situation with the explosion of artistic energy and participation in the Russian revolution. Elaine made the case for expanding public ownership and massive expansion of funding, not just in the arts but generally, to give everyone more time and facilities to take part.

After the four panel speakers, I chaired a wide-ranging discussion from the floor. Artists and campaigners expressed the importance of left-wing voices sounding out loud in the arts; how art can help us challenge oppression; the value of artistic endeavour to all people in all circumstances; and the need for more resources in this most human of industries.

The discussion was so popular that it overran by several minutes, ahead of the two socialist novelists giving readings and signing copies of their latest works. Most of the 60-odd attendees signed up to find out more about Bad Art, and there was a queue to buy the latest Bad Art magazine.