How art helped make the revolution 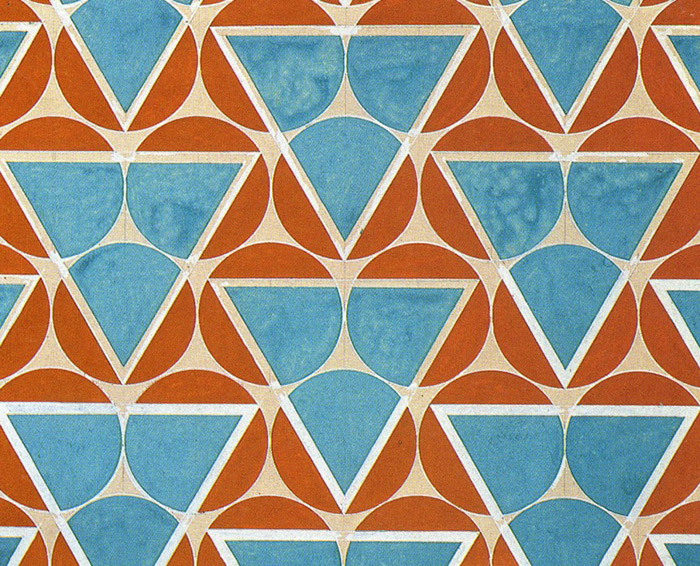 Revolution in Russia swept away the dictatorial rule of the tsar in February 1917. Then in October, led by the Bolshevik Party, a second revolution set up the world’s first workers’ state. Society was turned upside down as working-class people exercised power through the direct democracy of mass councils – or in Russian, ‘soviets’. It was a time of liberation and celebration.

But building the foundations of a socialist society would not be easy in such an impoverished country. The economy had been wrecked by the tsar’s disastrous involvement in the First World War as an ally of British and French imperialism. Then civil war raged as the reactionary forces of the old regime were backed by the military intervention of the capitalist powers.

Stretched resources had to be turned towards defending the workers’ state, rebuilding the economy and providing people’s basic needs.

Even so, in November 1917 the church’s stifling monopoly on education was ended. Teaching methods were modernised and made relevant to working-class and peasant communities. Children were encouraged to take part in music, drama, literature and art as part of an all-round approach to human development. Free technical college and university education was opened up.

From August 1918, the agit-trains criss-crossed the country, spreading news of the revolution’s aims: democratic decision making, land reform, women’s equality, the right of national self-determination, international solidarity. The carriages were brightly painted, depicting topical themes. They fired the imagination with debates, news, recordings of events in Petrograd and Moscow, exhibitions, performance and film. The ‘Red Star’ ship towed a cinema barge with seating for 800 people.

Censored under the tsar, shunned by the old art establishment, rebellious artists were swept up by the mood. They got stuck in. One key task was to raise the educational level. It is impossible, after all, for people to run society when most of them are illiterate. Poster art came into its own.

In 1918, the avant-garde artist Vera Ermolaeva founded the ‘Segodnia’ (Today) collective in Petrograd, the first Soviet children’s book publisher. This was when Russia’s paper-producing regions were occupied by enemy forces, effectively halting book production. When the civil war was over at the end of 1920, printing went into overdrive. By 1922 there were more than 300 publishing houses in Moscow and Petrograd.

Ermolaeva also worked at the Petrograd City Museum and helped Kazimir Malevich develop the student-based ‘Unovis’ (Creators of the New Art). This forged a direct link with the Lomonosov porcelain factory – art into mass production. They teamed up at the experimental and interactive Museum of Artistic Culture which aimed to put control of art into the hands of artists.

Yiddish literature was another crucial part of the education drive – Jews had long been persecuted under the tsar – with leading roles played by artists such as Marc Chagall. This was only possible because the Bolsheviks had lifted tsarist restrictions on the Yiddish language.

In August 1918, Chagall became commissar of arts for Vitebsk, the town of his birth (in what is now Belarus), organising art schools, museums, events and conferences. He set up the People’s Art College for 300 students in a residence taken over from a fat-cat financier. A local newspaper announced: “From the lavish mansion of the banker Vishnyak, built on the blood and sweat, the suffering and tears of hundreds and thousands of people impoverished by usury, the dawn of a new culture rose above Vitebsk.”

Lyubov Popova applied her ground-breaking art to set designs for the radical theatre director Vsevelod Meyerhold. His style was visual, bold and energetic, engaging the audience – not patronising or aloof. Varvara Stepanova produced an iconic poster for Sergei Eisenstein’s revolutionary film Battleship Potemkin. Popova and Stepanova worked together with the state textile factory in Moscow.

Free art studios were set up in Moscow in 1918. One of the teachers was Vladimir Tatlin, who designed a building with rotating floors, meant for the conferences, executive meetings, and communications centre of the Third International, originally set up to spread socialism across the globe. The building was to be transparent so the workings of socialist democracy could be seen by all.

Steel shortages and technological problems meant that Tatlin’s tower could not be built at the time. Its design stands, nonetheless, as a testament to the ambition and optimism of the day.

Tackling the housing crisis was another pressing priority. Innovative solutions were encouraged, combining areas for communal eating, recreation and meeting spaces. The plans often included crèches, shops, libraries and medical services. A central aim was to promote women’s equality and participation by freeing them from isolating domestic drudgery.

The general approach was to link art, architecture, engineering and production – breaking down rigid divisions and hierarchies. Inevitably, tensions and jealousies arose at times, reflecting the difficult conditions and the pre-1917 upper-middle-class roots of many of the leading artists.

But the new workers’ state had prepared the ground for an outpouring of energy. Only by nationalising key economic sectors and developing a plan of production could the necessary resources be freed up. And that was a beacon for the whole world – socially, economically and culturally. It had created the most modern of modern art anywhere on the planet, and involved many thousands of workers and youth in creative activity, science and technology.

Tragically, however, this new generation faced an almost insurmountable barrier. It is impossible for any country to realise socialism on its own, and Russia in particular needed the support of more economically advanced countries. Although revolutionary movements shook Germany between 1918 and 1923, they did not overturn capitalist rule. Other mass movements in Italy, Britain, China, the United States, France and Spain – among others – likewise failed to make the breakthrough.

The isolation of the revolution in Russia left the new workers’ state stunted. Straining to win the civil war and rebuild the shattered economy, workers did not have the time or energy to participate fully in running society. A bureaucratic caste of administrators and officials – increasingly backed by security forces – began to consolidate at the top.

Led by Joseph Stalin, it was a privileged layer resting on top of the nationalised planned economy. In the process of strengthening its grip on power, it snuffed out the last remains of workers’ democracy and derailed revolutionary movements internationally.

The superiority of a planned economy over profit-driven capitalism could be seen in the growth of the Soviet Union into a world superpower after the Second World War. Moreover, in important social provision: jobs, housing, education and healthcare. The grotesque top-down nature of the system under Stalin, however, meant that this was achieved at colossal cost: in wasted resources, environmental disaster, distorted development and savage repression costing millions of lives.

Leon Trotsky, co-leader with Vladimir Lenin of the 1917 Bolshevik revolution, and many other Bolsheviks and workers, fought for workers’ democracy and in defence of international revolution with the ‘Left Opposition. This was opposed to Stalin’s self-serving declaration of “socialism in one country.”

But the global revolution was stalling, and the population was exhausted by war. And so engagement in the democratic structures of the Soviet government and Bolsheviks – by then renamed the Communist Party – receded. Stalin’s supporters in the bureaucracy took advantage of this period to marginalise the Left Opposition, increasingly with physical repression, and dismantle the democratic structures – to guard against any future resurgence.

Stalin’s attack on democracy went hand in hand with a general attack on freedom of expression. In 1926, the Museum of Artistic Culture was shut down. In 1927, Trotsky was expelled from the Communist Party, forced into exile the following year. In 1930, Malevich was arrested, his work suppressed. Many artistic organisations were closed in 1932.

In 1934, the Stalinist regime declared that ‘socialist realism’ was the sole authorised artistic style – alongside ‘proletarian literature’. Artists and writers were being ordered to glorify the regime, Stalin above all. Trotsky would sum it up as “a kind of concentration camp for the arts.” Rare examples of innovation and resistance did exist – no regime can impose complete control – but they had to be smuggled out from artists to the population like contraband.

Those unwilling to toe the Stalinist line were targeted. Artists, writers and composers saw their work censored and confiscated. Ermolaeva was arrested in 1934, charged with ‘anti-Soviet activity’ and sentenced to three years’ imprisonment. Just before her release, she was sentenced to death and shot in a forced labour camp in 1937.

In 1938, Meyerhold’s theatre was closed down. In 1939 he was arrested and tortured, on the ludicrous accusation of spying for both Britain and Japan. He was executed in 1940. Zinaida Reich, the actress he married, was knifed to death in their apartment, undoubtedly by secret police agents.

Thousands of other examples could be given. This ran alongside the Moscow show trials as Stalin systematically purged revolutionaries from the system.

Trotsky continued to fight against this counterrevolution. In 1938, the year he and others set up the Fourth International – founded to defend the revolutionary ideas the Third International had by then abandoned – he drew up the ‘Manifesto: Towards a Free Revolutionary Art’. This was with André Breton, co-founder of the Surrealist movement, and the artist and revolutionary Diego Rivera. It led to the formation of the International Federation for Independent Revolutionary Art, grouping together anti-fascists and anti-Stalinists.

It was a bold but short-lived initiative. The onset of the Second World War and the assassination of Trotsky by one of Stalin’s agents in 1940 cut across it. Stalinism emerged strengthened at the end of the war – until it collapsed in 1989-90.

Trotsky, however, had left a priceless legacy: keeping alive the proven idea that the working class can take power on a democratic socialist and internationalist programme. That there is a viable alternative to capitalism, and to Stalinism. His analysis of art and revolution, art and society, has also been an invaluable addition to Marxist understanding.

Today’s breathtaking advances in information technology, robotics and production technique would make socialist economic planning far easier. They would free up the time people need to run society collectively – and to engage in all kinds of artistic, scientific, social and political interaction, raising cultural levels to new heights.

So, when we look back at all that was achieved in Russia a century ago, against all the odds, we catch a tantalising and inspirational glimpse of what is possible – and what is sure to be surpassed next time around.

Manny Thain is reviews editor for Socialism Today, the monthly journal of the Socialist Party (England and Wales). This article was originally written for the Socialist newspaper.

2017-10-18
Rob M
Previous: The revolutionary resilience of art
Next: Twin pincers of counterrevolution: Stalinism and the capitalist establishment 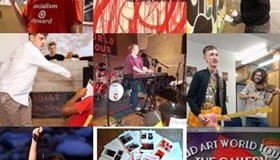 #BadArtWorldTour a big success at a time of growing ferment 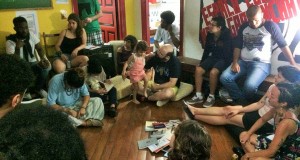 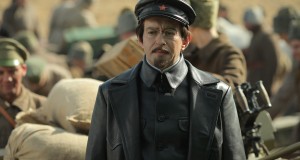