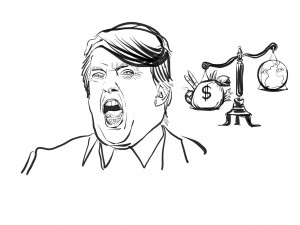 On the eve of his inauguration as president of the United States, Donald Trump announced his plan for a vicious round of cuts to social services. In all, it would amount to a reduction in $10.5 trillion over the course of ten years.

Trump formalised these proposals became in March 2017, and provoked widespread anger across the country.

But, in a matter of months, Trump’s attacks on the arts seem to have been defeated.

Much of federal arts funding goes to supporting community arts groups in rural, traditionally Republican-voting areas. And many Republican congressmen feared the electoral repercussions if they were seen as cutting those programmes. The May Congressional budget proposal not only preserved all the arts funding, but increased the NEA and NEH budgets by $2 million each. This is a welcome development – but, as with Trump’s attempts on healthcare, there is always the possibility of renewed attacks down the line.

The abolition federal arts programmes has been a rallying cry for the right for several decades. Economically, these attacks on the arts make no sense, even from a hard-line neoliberal perspective.

The NEA budget, for instance, makes up only 0.004% of the entire federal budget and costs $£0.45 per person per year. Meanwhile, Trump’s proposed border wall would cost 146 times as much. The defence budget, which Trump intends to expand, costs 3,600 times as much. The new Air Force One jet alone costs over ten times as much. Rather than any real economic concern, the right-wing attacks on arts funding are a symbolic and politically motivated attack on artistic expression.

The first federal arts programmes in the United States were established under then-president Franklin Roosevelt’s ‘New Deal’, as part of the Works Progress Administration (WPA). The NEA, NEH and CPB were established later – in the 1960s, as part of Lyndon Johnson’s ‘Great Society’ programme.

While right-wing attacks on these programmes accuse them of “socialism,” they were all part of Keynesian attempts at saving capitalism from revolutionary upheavals in the wake of Great Depression. The WPA was presented in purely economic terms as a way to provide jobs during the depression. The later programmes had a more political component to them: a desire to present a liberal vision of the US as a global cultural centre during the Cold War.

Despite the safe, pro-capitalist values motivating these federal arts programmes, they have been a target for the right long predating Trump.

In 1938, the WPA came under investigation by the Dies Committee – better known as the witch-hunting ‘House Committee on Un-American Activities’, later associated with Senator Joseph McCarthy. Ronald Reagan, president from 1981 to 1989, tried to abolish the NEA and NEH even before Trump did. And it was a plank in the ‘Gingrich Revolution’ when Congress turned Republican during Democrat president Bill Clinton’s administration. Leading up to Trump’s election, the ‘alt-right’ propaganda website Breitbart promoted conspiracy theories about the NEA being used to promote “cultural Marxism.”

The popularity of these attacks among establishment politicians, especially Republicans, is due to their ability to give a populist cover to an anti-working-class economic programme. Most attacks on arts funding whip up hysteria about taxpayer money financing “subversive” or “perverted” artworks, as well as unfounded claims the cash is directed to elitist east coast arts institutions. This can make budget cuts and privatisation appear beneficial for the working and middle classes.

This is at odds with the reality of how arts funding is typically used. In 2016, 40% of the NEA’s money went to funding arts programmes in high-poverty neighbourhoods. Even when NEA money does go to elite arts institutions, it is often supposed to provide access to the wider population – as when the Chamber Music Society of Lincoln Center was given a grant to stream its concerts for free. Federal arts funding has helped promote artworks that the capitalist market isn’t willing to touch. This includes recovering, preserving, and archiving old films that contemporary movie theatres can’t profit from, and defraying the costs of novels that publishers would otherwise ignore.

But even without Trump’s attacks, federal arts funding is woefully insufficient.

The vast majority of artists in the US will never receive a grant from the NEA or any related institution. Those who do receive grants often still have to supplement their funding with separate grants from privately owned philanthropic institutions like the Ford Foundation. Most people trying to make a living in the arts rely on work-for-hire jobs where they have little creative input. And spaces for independent, underground arts scenes to flourish are woefully underfunded, dilapidated – and dangerous. This situation was made tragically clear last year when a fire at Oakland’s ‘Ghost Ship’ art space claimed 36 lives.

Under capitalism, most attempts at artistic expression require some sort of patronage, be it from private philanthropists or public grants. But patronage comes with strings attached – especially in the private sector. This was seen in the case of Diego Rivera’s famous mural, ‘Man at the Crossroads’. This revolutionary mural was commissioned by the oil magnate Nelson Rockefeller, who then had it destroyed when it became known that Rivera had included Marx, Engels, Lenin and Trotsky leading a march of workers.

Public arts funding can fare better, since it’s less subject to the whims of individual capitalists. But it’s by no means free of bias. This is clearest when you look at the TV and radio news programmes funded by the CPB. These shows are largely indistinguishable from the capitalist-owned media.

Attacks on federal arts funding often harp on alleged left-wing bias in the works being promoted. But most of the actual attacks on free expression in federal funding are the product of grants being cancelled in the face of those very attacks.

In 1989, an NEA-funded exhibition of photography by Robert Mapplethorpe was cancelled in response to homophobic attacks by the religious right. In 1990, four performance artists, dubbed the “NEA Four”, had their NEA grants revoked because of the political content of their art. This lead to the Supreme Court case National Endowment of the Arts v Finley – which ruled that withdrawing funding did not violate the First Amendment right to free expression.

These sorts of cave-ins came back with the more recent wave of right-wing hysteria. In 2009, Breitbart launched a renewed attack on the NEA, with a conspiracy theory that the agency’s communications director Yosi Sergeant was turning the NEA into a mouthpiece of radical leftist politics. In response the NEA removed Sergeant from his post.

Even though Trump’s latest attempt to defund the NEA has failed, the threat of defunding can still pressure the agency into revoking grants for artists who come into conflict with Trumpism and the establishment.

The fight against Trump’s attacks on the arts is a welcome development. We can justly celebrate the temporary victory won against those attacks.

But the fight’s not over. We need to prepare to beat back future attacks. And we need to go on the offensive. To demand a massive increase in arts funding – and democratic artists’ and workers’ control over how it’s spent.

George Martin Fells Brown writes software for a living and plays trombone and dances in his spare time.