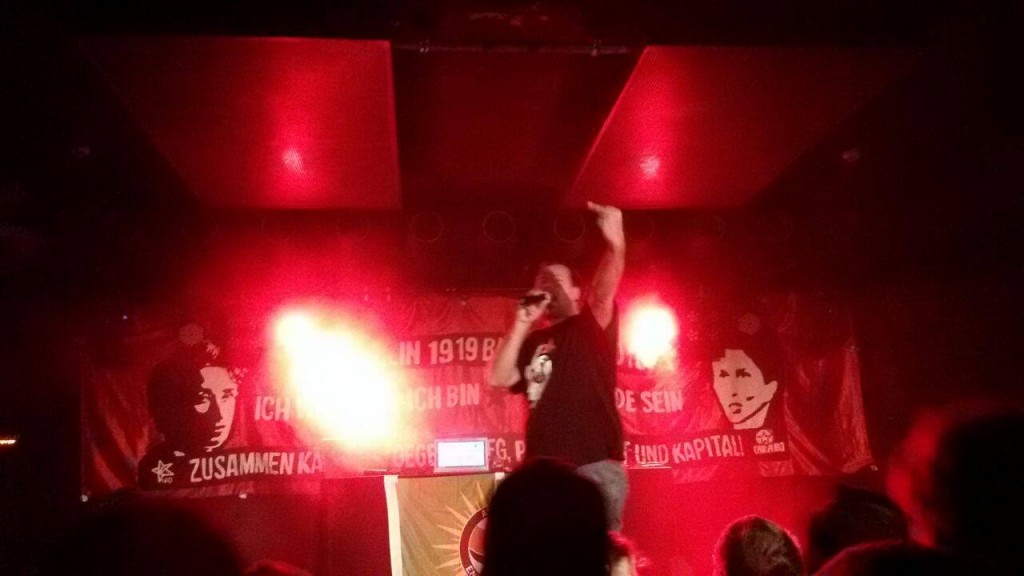 Holger Burner is a socialist rapper, activist and member of Sozialistische Alternative (Socialist Alternative) in Hamburg, Germany. He started releasing his own music in 2006, and has so far released four solo albums and one album with the rapper Albino. In this interview with Bad Art he talks about his influences, how he started and the connection between music and politics.

As a political rapper, you combine music with politics. What made you become a socialist? Were you a rapper before you became active in politics, or did you start both at the same time?

I became active politically in the anti-racist movement in the mid-1990s. I was 14 years old and wanted to do something to help stop the far right. That was where I met socialists for the first time.

Their ideas and how they organised a spoke to me. They were different to the ‘autonomous’ activists at the time: the socialists organised to bring the whole working class into activity against racism and capitalism, not just a small number of self-selected lefties. The socialists had ideas about how racism worked in the interests of big business and came from above to divide the working class. The autonomous people just said the majority of the population was stupid and racist.

For me, being from a working-class family, it was clear who I should join: those who had a strategy to beat racism, and also were active against the other madnessess of capitalism like poverty and war. This was the same time that I started listening to rap music – which was no surprise, as many elements of hip hop expressed what I was feeling politically; rage, reclaiming public space with graffiti, and internationalism.

What made you start making your own music?

That was kind of a coincidence. In the early years of hip hop in Germany there was an activist culture, not a consumer culture. It was normal that you tried something out and since I always had fun using speech. I had no money for turntables and basically suck at drawing – not that I didn’t try, I did one or two pieces under the name ‘KBW’ (Kommunisten bemalen Wände – “communists paint walls”) – but they were butt-ugly and I understood that the public deserves better.

So I started freestyling. In the beginning I went to a jam session and ended up opposing some of the sexist attitudes I found there. Later I went to Hamburg and met interesting, positive people in ‘cyphers’ (freestyle gatherings) and continued to freestyle more. As a political person my freestyles were often political as well.

That was when people started telling me I should do concerts as the things I rapped about were relevant and needed to be heard. Up to that point I had not written a single song. I basically started writing songs because some DJs I liked wanted to organise a concert with me. And after the concert a number of people told me that I should record these songs – that was how my first album came into being.

Is it important for you that art, and especially music, has a political message?

I think every piece of art or music has a political message, conscious or unconscious. It’s just not often as blunt as some anti-war songs or [Picasso’s] Guernica. Everything you express is a comment on living conditions – the mood of a song or a picture says a lot about how or where you live.

The place where you practise art is political. Do you have money to rent a workshop or practice room or do you meet on the street? Every relationship you have when you write a book or sculpt a sculpture in your mind is influenced by your working conditions, how much time you have, if you can afford to have a holiday or eat out once in a while. Often you see that people make significant art when they are struggling and make less relevant art when they become established – due to the influence of culture industry and their new living conditions.

Choosing to work with, parallel to or against the capitalist culture industry can be a very political matter too. I grew up in Kassel. There is a traditional arts exhibition there every four years. The founder had a philosophy of art having to be a part of everyday experience in the streets, not confined in sophisticated buildings you have to pay entry for. As his first art exhibition, he planted 5,000 Trees in Kassel. I grew up playing alongside those trees.

Art is political whether you want it to be or not. Every movie you watch in which women only talk about men when they talk amongst themselves helps divide the working class on gender lines, for example. So I prefer that the political message of art be on the level of solidarity instead of oppression.

How do you write a song? Do you already know what story you would like to tell, or do you just write and see what comes out?

I have a lot of things I want to say and write a song about. But when I sit down to write, I put on a number of beats I have access to and narrow it down to the one beat that speaks to my current mood or fascinates me most at that moment due to its rhythm. So if I happen to pick a beat which doesn’t fit for the most pressing topic I wanted to write about, then I either have to choose one of the other less-pressing topics or try to find a beat which would fit and speaks to me.

If I’m very lucky I sometimes can give sample ideas to the friends of mine who build beats (I’ve developed no skills for that!) For example, like now, where Samurei (a beat producer) sampled a part of [national liberation protest song] ‘Marşa Rojava’ by Kendal Manis for me to write an anti-G20 song on. This was especially fitting because, alongside assholes like Trump, [Turkish president Recep] Erdoğan also visited Hamburg in July.

So if you want me to have more output: send me beats. That heightens the chance that I say, “Damn, I have to write a song on that one!”

But back to the original question. After I decide on a beat, I decide on the topic of the song. I never write songs which are just random lines that come to me. Some people can do that very well, but that’s not how I write songs.

Which difficulties do you face as an artist under capitalism?

Since my life is less influenced by being “an artist” and way more influenced by my political activity, my job and my friends, it is not at the top of my mind. But simply speaking, this is the difficulty: if you have no time to do art you won’t do art. So if life’s more stressful at the moment and you need every moment you are not at work or politically active for recreation, then you don’t have time for creation.

I obviously face some repression for being a political artist. Like newspapers quoting parts of my lyrics and telling venues they must un-invite this radical lefty. Or the state of Rheinland-Pfalz pressing charges against me under the claim of ‘Volksverhetzung’ [incitement of the masses]. Or one of the major newspapers in Germany trying to pressure die Linke (the Left Party) not to stand me as a candidate.

These things happened not because I’m an artist but because I’m a revolutionary. As such you know that’s gonna happen. If you fight back against the ruling class they will try to stop you and – as long as they still have the power – that obviously sucks!

The last thing I would say is that it’s obviously way more difficult to get your art known if you have no money in the first place. For years now I haven’t had the money to print shirts and hoodies, for example, so less people walk around in shirts introducing other people to my art. The same is obviously true for stickers, paid Facebook ads, getting videos produced… If you have no money capitalism gives you almost no chance to propagate anything, there is no difference if you want to print leaflets or press a vinyl record.

Can working-class and poor artists achieve things with their music, despite the big business-controlled music and arts industry?

The artists on our side of the class struggle were most influential in the times of big movements of our class. I doubt that [Chilean revolutionary folk musician] Víctor Jara would have had as big an audience if [mass left-wing political alliance] Unidad Popular hadn’t made his music part of its campaigns. And I doubt very much that that there would have been so many great anti-war songs in the 1970s had not a million-strong movement against the wars swept many artists it.

The ruling ideology of any time is the ideology of the ruling class. That holds true until after the revolution abolishes class. But in times of big movements, we can break the grip of the ruling class, because their media promotes songs about the weather when the people want to talk about strikes. That is when our newspapers, our leaflets, our songs and our graffiti can reach the people.

Which other musicians are your biggest influences?

That’s very difficult to say because I listen to a lot of music and enjoy the evolving of sound. But as a youth I would have said Public Enemy had the biggest influence for me.

What is your favourite song by another musician at the moment?

That would be either ‘#’ by Oshun or ‘Dead Body’ by Little Simz.

Which of your own songs has given you the greatest pleasure?

‘Für Euch’ (For You), due to the positive, strengthening outlook I don’t often manage to put in songs.

Can you describe the arts world today in five words?

If you had one political wish, what would it be?

“If I had one shot, one opportunity…” I’d clearly go for no less than international socialist revolution.