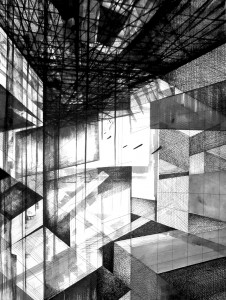 Translation in sounds by Alejandra Abad (*explained below)

In capitalist society, many critics tend to deify artists; treat them as godlike, as if they had access to some special and hidden source of inspiration, spurring their artistic production.

But there are more rigorous approaches to investigating the history and development of ideas and their proponents – including the approach of Marxism. Music and musicians are entirely embedded in their social and economic context: in their living conditions, the historical events unfolding around them, and so on. No genre can be meaningfully cut loose from its historical context.

Explicitly political and progressive acts abound, even today. Think of US hip-hop duo Run the Jewels, English post-punk two-piece Sleaford Mods, or the wave of artists working with and inspired by the Black Lives Matter movement. Music tends to echo the circumstances in which it is made, and those same circumstances help determine which artists get heard.

Post-punk pioneer Ian Curtis might have been a Conservative Party voter, but his howl was the howl of deindustrialisation, poverty and social exclusion. His band Joy Division’s music of desperation was the desperation of a generation whose future was being sold away by neoliberalism, a political trend which accelerated capitalism’s driving down of working-class living conditions. Curtis’s music, like much great art, was a vivid expression of a social condition and mood.

That is not to say that there is one ‘right’ expression. Both Nirvana and grunge in general, and experimental rockers Radiohead, gave expression to the grievances of post-Berlin Wall youngsters without an alternative to rampant commercialisation and consumerism. One angry and bored, one sad and lost.

So, if music reflects its circumstances it should be no surprise that, to a certain degree, we’re all dancing to the tunes of our dominant system: neoliberal capitalism.

As in other sectors, decades of free-market capitalism have led to music-sector monopolies. We live in a time where the music world is dominated by three big companies: Sony, Universal and Warner.

The process of monopolisation that played out in past decades even saw mastodons like EMI and BMG swallowed by still bigger players. The goal of these companies is simple: to make profit.

Artists and their work are mere commodities. What record executives have found can sell the most with the least effort is recognition and homogeneity.

Mostly gone too are the days of feverish searches for the next talent, the next artist whose innovative sound can strike a chord with a wide audience – and turn a profit. Increasingly, top pop musicians are groomed: their music is made for them, their look is selected for them. Who needs to hunt if you can breed?

Music industry monopolies encourage musical conservatism. One popular example of this is the ‘millennial whoop’, a sequence of two intervals that was omnipresent in commercial pop, rock and R&B from Kings of Leon to Katy Perry. A simple, recognisable hook that was repeated over and over.

Of course, all music is based on repetition, recognisable sounds and sequences, variations on a theme. But when does referential creativity become mechanical duplication? Certainly, one major tendency in pop music seems to be towards greater and greater sameness.

This neoliberal musical conservatism reflects the increasing commercialisation of all aspects of life. Big retail, coffee, electronics and hamburger chains dominate the view of contemporary cities. The monotony always attributed by capitalist propagandists to communism is more and more apparently the preserve of capitalism in the 21st century.

Likewise, groups of people that form a countercurrent to mainstream thinking – subcultures, countercultures, revolts and ‘scenes’ – all give and gave rise to their own sounds. Like all art, this is a collective effort, a result of the activities of a number of people. These new scenes look for new sounds, outside traditional boundaries.

They look for new ways to voice the feelings and observations of themselves, their social conditions and the world around them. These efforts can only survive if supported by a dedicated group of fans, musicians, promoters, venues, bloggers and so on, who relate to that new sound, from within their own social conditions and worlds. It grows out of discussion between likeminded people, and it is initially spread within and by such a group of people, who are inextricably linked with social developments.

Grunge is unthinkable without the Seattle underground, black metal without the Norwegian one. The discriminated and left-behind youth in the 1970s Bronx created hip hop. The late 1960s electronic scene of West Germany, looking for a German sound distinct from American commercial music, created krautrock. Marginalised youth in London in the early 2000s came up with grime. These musical styles and scenes all had their own venues, networks and methods of spreading music, their own social clubs and gatherings on which they depend to survive.

These scenes come under increasing pressure. Small labels can’t compete with majors; they can only survive in markets that those music giants don’t deem profitable. When Sony decides some new genre might raise a dollar, independent labels fall like flies. Big business can sell products cheaper and on a wider scale, to consumers who are often themselves hard-pressed by austerity and low wages. They can offer artists a higher wage, a way to live off their music.

The music in question, in turn, gets hollowed out, as compliant artists get picked and groomed to appeal to a broader audience. Intense collaboration, a characteristic of any non-commercial music scene, evaporates, adding to this hollowing out. From NWA to Kanye West in rap, from Emperor to Sabaton in metal, from Dead Kennedys to Green Day in punk.

The drivers of all of these processes are features of capitalism in every form. But although they could not stop the problems outright, the limited reforms of the post-war period in most advanced economies – comparatively better wages and benefits, more facilities and free time – had a partial counteracting effect on them by allowing greater engagement. Neoliberal capitalism, a return to a world without even these meagre gains for working-class and young people, has ended this.

In the independent music sector, both live and recorded, the effects of neoliberalism cut deep.

As the monopolisation of the music market continues, more and more independent and non-profit festivals struggle to get by or disappear completely. All Tomorrow’s Parties, an innovative touring English organiser – gone. Quart in Denmark – gone. Incubate in the Netherlands is barely clinging to life. They are out-competed by events like Northside, Best Kept Secret or Down the Rabbit Hole: festivals organised by multinational companies, at first cautiously catering to a niche, then commercialising completely. People are goaded into going to heavily advertised music “happenings,” paying enormous ticket prices and being herded into queues to pay outrageous prices for watery beer.

Meanwhile, techniques of mass production have made it possible to make and distribute albums easily and cheaply, and the internet has made music accessible to billions of people. Before the digital revolution, record companies were almighty mediators between musicians and audiences, directly controlling who could make a profit, hampering any music that was too forward-thinking (unless the supportive scene was large enough). Today, almost anybody can get their music published online.

But in a profit-based economic system, streaming behemoths like Apple and Google, Spotify and Deezer can exploit this huge supply to drive down artist payment to next to nothing. Breaking through the haze of commercial music as a fan is nearly impossible. It requires a strong network of likeminded music fans with a lot of time on their hands – a scene – to really get into more innovative music. In a world of boosted advertisements only available to the likes of Bieber and Kanye, it is even harder for a non-commercial musician to get exposure.

Fans who like to own physical copies of their favourite albums are paying more and more as the physical market is increasingly developing into a luxury market. This is, however, also partly how today’s independent scenes and labels survive. They cater largely to a musically interested layer of the middle class which can afford to buy vinyl once in a while. This is partly why relatively non-commercial scenes like drone survive: they have a loyal fan-base with some basic purchasing power.

On the one hand this ensures the continuation of (some of) the genres still trying to break new musical frontiers. On the other hand, it’s a last resort that can equally inhibit these genres from growing. It blocks many possible working-class musical sensations like Cobain or Curtis from finding them, and cuts ties with wider society, diminishing relevance. And neoliberal austerity is eroding the wealth of the middle classes too, and thus the financial base on which many independent scenes rest.

The current apparent lack of a new punk or grunge, making it from the hard streets to the fancy television shows, gives today’s music world a stagnant look. The solution is political struggle.

Resistance against attacks on the living and working conditions of the majority must include a programme by and for artists, with demands like taking the big labels, festivals and streaming services into collective ownership, and placing them under the direct democratic control of artists, workers and audiences.

This should help fund free or very cheap rehearsal and performance facilities. Public ownership of all the top corporations could cover the rest, as well as secure housing and employment, decent wages and benefits, and plenty of free time for all. This would allow for the survival of artists and scenes which stay true to their social roots, and can become a breeding ground for musical revolutions.

Even the struggle for change will in itself be a factor in creating new music. Occupy Wall Street and Black Lives Matter saw the rise of a couple of engaged artists, like Run the Jewels, reflecting the best and worst of those movements: experimental but often apolitical. Their new album, Run the Jewels 3, is a step forward in that sense, partly reflecting the political step forward from Occupy to the Bernie Sanders phenomenon.

Struggle gives rise to new music, but also needs to give rise to a society in which new and innovative music can prosper. The Russian revolution 100 years ago was a prime example of both. But within a system that sees music as a tool for profit, there can be no alternative.

Koerian Verbesselt is a revolutionary socialist active in Linkse Socialistische Partij in Belgium. He writes music reviews, and in his spare time is a guitar and bass player and producer.

Translation in sounds was made with ink on watercolor paper in 2007. The work was composed of several pieces that together made a whole. Each piece varied from light to dark depending on the use of the ink. The illustrations were created with simple and complex lines. Music was the concept on how I began to draw on the white sheets of watercolor paper. The timing and changes of the music made me also change speeds and hand strokes. I wanted to demonstrate the weight of sound. The depiction of sound was visually represented by the contrast used with the ink onto a untouched light background. If the ink took over the white space of the paper then the sound was also taking over the space I was in. Simple and complex lines took form and shape depending on how I understood the sound. One of the ink drawings was chosen to become a banner at the Lollapalooza music festival at Grant Park, Chicago. Lollapalooza and the School of the Art Institute of Chicago celebrated student art with Who art thou? this exhibit lasted for 3 days and I was able to celebrate among my favorite musicians.

2017-02-24
Rob M
Previous: One In A Series Of Many Acts
Next: Interview with surrealist artist Peter Harris