Aspiring artists in Sweden competing on the pop talent show ‘Idol’ are due to strike from 25 November 2016. Leo Nobel reports on their struggle. 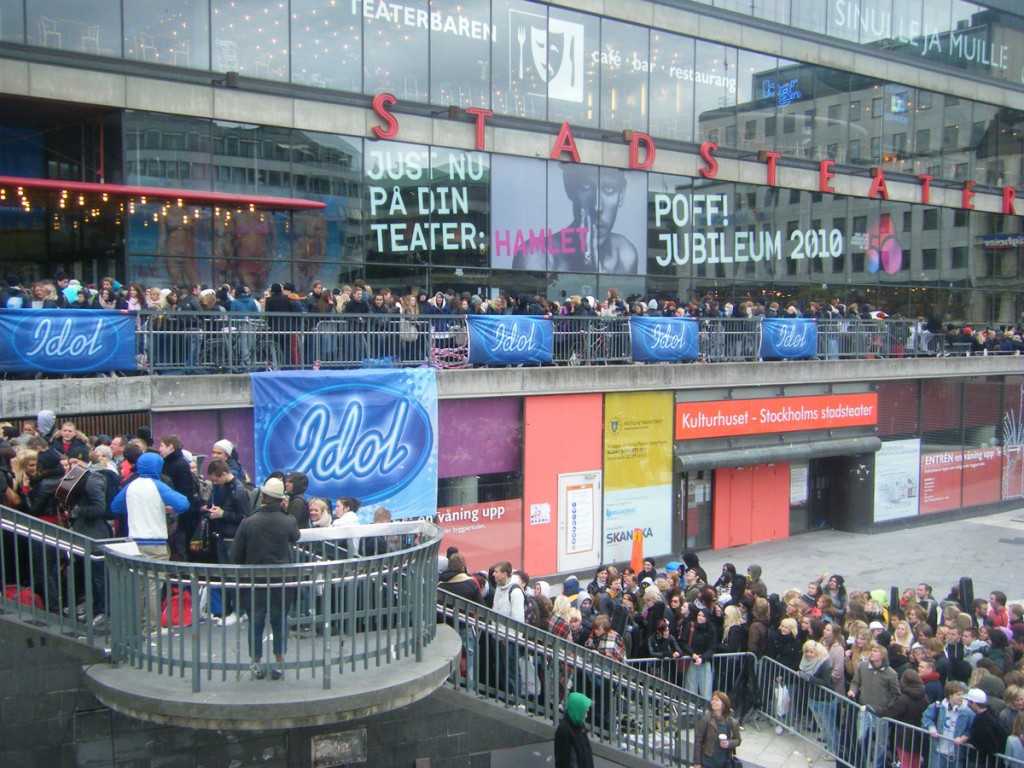 FremantleMedia, Idol’s production company, has refused to sign a collective agreement for competitors in the show’s finals. The current agreement means participants earn 875 Swedish Krona ($94/€89/£77) per week after tax, and that they agree to work around the clock.

On top of that, they lose the copyright to the material they present in the show, and can be forced to sign contracts with record company Universal and management company Versity Music. These are contracts where they can’t negotiate the conditions, and which can be legally binding for up to ten years.

Musicians’ union Musikerförbundet, which organised Idol contestants belong to, has held negotiations this autumn with FremantleMedia about signing a collective agreement with Idol participants for decent pay. When the production company declared on 10 November that it will not sign any agreement, Musikerförbundet answered by threatening strike action.

All members, musicians and singers, will strike from 25 November. They will blockade strike breakers with a mass picket line including speedily recruited musicians, and Musikerförbundet will request sympathy strikes from other unions if management refuses to reach an agreement before 25 November.

Fremantle managers have responded in the newspaper Aftonbladet, claiming that Musikerförbundet doesn’t have any understanding about Idol – and that they respect trade union work, but the argument doesn’t hold when it comes to Idol. Apparently the struggling potential artists who participate in Idol, of all shows, don’t need a decent living wage.

They have, on top of that, threatened to kick participants out of the contest if they strike. FremantleMedia Group, the company’s UK-based parent, is, according to its own material, one of the world’s leading producers of TV entertainment, with production companies in 22 countries.

The weekly socialist newspaper Offensiv has interviewed Per Herrey, a lawyer at Musikerförbundet, who is involved in the negotiations:

How come such big companies as FremantleMedia are allowed to exploit young artists and musicians like this?

That’s a good question! I think that as long as you don’t fight back, such things can go on. In this case, participants have for several years been discontent with the agreements, but no one has dared take up the fight. This year is the first time our members have got in touch with us about the Idol agreements, and I want to give all credit to the young people who have made a noise about it!

An individual artist is generally speaking rather weak against big multinational record companies and such, which means that few dare to stand up against them, even when they get agreements they understand are very bad.

You have spoken about sympathy actions from other trade unions. Are there any particular trade unions you are relying on?

I can’t tell you that exactly. We are a part of the LO (Swedish trade union confederation), and it’s up to each and every trade union to conduct sympathy actions, and there are many skilled categories that work in the production of Idol. For example, the electricians could strike, or the workers who take care of transport. This is something which would strike a hard blow against the whole production.

If you do go on strike, will it be possible for the public to visit picket lines to show their support?

Yes, we will organise picket lines, and people are welcome to come to us and show their support!

The fact that young people are forced to work in slave-like conditions is of course scandalous, but unfortunately not something uncommon in the music industry. There is a current norm which says that artists and musicians should be ‘happy to get a chance to play’ or ‘keep in mind that they get publicity’ and therefore agree to play for slave wages, or often for free.

At the same time, production companies, record companies, promoters, pubs and the like make huge profits from musicians and other artists. A common scenario is that a band plays for free at a pub, with the explanation that the pub can’t afford to pay anything. At the same time, the band attracts an audience that pays for tickets, buys food and drink, and in that way increases the pub’s earnings substantially.

Fighting back against exploitation is always the right thing to do – and in this case, it is a fight for the whole music industry. If it is seen as acceptable to give aspiring pop stars wages they can’t live on, what then goes for the rest of the industry?

The fact that most musicians works as freelancers and don’t have permanent workplaces or consistent colleagues makes it harder for them to organise themselves. This is part of the reason musicians and artists often face even greater exploitation than other workers. But when a unionised workforce puts its foot down, that sends signals to other such workers around the country that they don’t have to just accept playing for free or slavish contracts.

Musicians, like any other worker, produce a commodity which bosses make a profit on. It’s therefore a given that musicians, like nurses, construction workers and all workers, should be trade union members, and stand up for their right to decent pay for their work!

Leo Nobel is a musician in Stockholm. He works as a youth organiser for Rättvisepartiet Socialisterna (Socialist Justice Party).

2016-11-23
Rob M
Previous: Frida Kahlo: between art and revolution
Next: Socialism in space