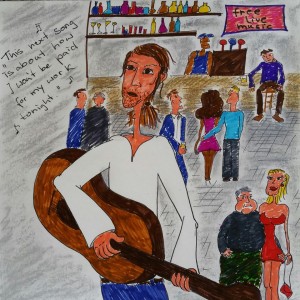 Many performers – musicians in particular – spend most of their early career footing the bill for their work, and getting little or nothing in return.

Musician Laura Comrats speaks out against this exploitative system.

So you wanna be a rock ’n’ roll star…  just take a guitar and learn how to play! Surely if you work hard enough and have enough talent, stardom will be easy! That’s the message the music industry bosses want you to believe. Unfortunately, things are not so easy, and the reality is quite different.

It’s very hard for young and working-class people starting out in music to even afford a decent instrument and find places to learn. Once you have jumped that financial hurdle, you need somewhere to practice. A young drummer learning death thrash in a block of flats is not very popular, so finding a place to practice is important – but hard and expensive.

Finally you’ve got a band together. Then you have to pay for regular practice. You share the cost with bandmates, but you can’t write an album in one-hour session, so it becomes a dedication, taking all your resources. Transport, equipment and rehearsal space cost a lot for people often on low or no wages.

But you’ve fought hard and you think you have something to offer. Probably by now you have a few groupies encouraging you.

You need to do a demo CD as there is next to nowhere for unknowns to start out. You can do it on the cheap, but the more you spend the better the quality and your chance, so you invest everything you can.

The CD shows you’ve got talent. But finding the first gig is still hard. So you copy your CD and send it everywhere you can – at more cost. You are happy to play anywhere for free as you’re still learning.

Then you get the gig, at a known venue. You have to do your own publicity and posters, but after all the other expenses it just feels normal. You pace the street putting up posters advertising the venue as you go. The tickets are £5 each, and you get £2 for every one that passes the door with your flyer – after the first 20 that come in, that is. Some don’t even offer this, just the promise of ‘exposure’. Others even charge you for the privilege!

You get friends and family in, maybe 30 people for your opening night. You make a few errors but the practice and expense has paid off; many say they liked it, and you now know you just need to get noticed.

It’s taken years to get to this stage, and a lot of effort and money – and at the first serious gig, if you’re very lucky, you get paid what it cost to turn up. This is “pay to play”. But just remember that message: ‘it just takes hard work and talent.’ The problem is that pay to play is where it stays for most. Even if you fill the venue, the money you get paid cannot cover what you spend.

Most brewers prefer ‘plastic’ theme pubs and bars to attract a wealthier clientele. The pubs and bars with live music use it to attract people and sell more drinks, but musicians get hardly any money for it. Festival organisers are making loads of money, but you don’t get to play there unless your band is already professional, and many smaller festivals – if anything – only give expenses.

The major labels don’t take any artistic risks; they concentrate on what they think they can sell. They sit on the back of the creative potential in society like a parasite. While making money, they invest nothing into new talent.

They blame the internet for their losses, but the truth is that the majority of the working class does not have enough money to spend on music. The crisis of the music industry is a symptom of the wider crisis of capitalism. Mainstream music is getting more and more streamlined – spend less, pay less. TV casting shows and even independent labels have developed a certain ‘hip’ streamlining.

The contradiction is that there are so many talented people out there, but we only get to see the tiny surface. Music can play a very positive role in politicising people, and it has done so in the past. We need to organise, to build a movement of musicians and artists, to fight for their rights, for better conditions as musicians in terms of pay, and free or genuinely affordable rehearsal spaces and equipment.

How to beat ‘pay to play’: a case study

In the late 1990s, musicians in the town of Rugby, England, got organised. They faced all the problems noted in the article, alongside the apathy of the local council, and a depressed music scene.

They organised themselves under the banner of ‘Rugby Musician Collective’. From small beginnings they eventually organise 22 acts. They were solo artists, thrash bands, DJs and techno-jazz acts… all sorts.

They organised noisy and musical lobbies and demonstrations in the town centre. They won the right to 20% of bar takings in a key venue and better conditions at a number of other venues, and boycotted venues that refused their terms.

This period saw the small town music scene boom with collective events, packing venues over and over. New acts were given a chance. The local council was forced to organise a festival, and open up council venues to gigs.

No to battle of the bands – use your collective power, build the scene and get paid! Why don’t you get organised?

Laura Comrats is a singer-songwriter based in Vienna. She is an activist with Sozialistische Linkspartei (CWI in Austria).