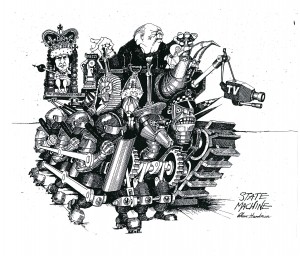 Alan Hardman is a print worker and political cartoonist who regularly produced editorial art for Militant. The Militant, now called the Socialist, is the newspaper of the Socialist Party of England and Wales. His art is striking, muscular and has razor-sharp socialist politics. Bad Art spoke to Alan about his politics and work.

You are a political artist. What first drew you to socialism, and to working for Militant?

In the 1960s and early ’70s I was a member of the Labour Party and active trade unionist. I was a trained lithographic printer having served a six-year apprenticeship at a print works in Barnsley, my home town in Yorkshire, north England, after which I did two years’ compulsory national service in the artillery.

This was the best political education a young socialist could have. The army imagined they were training me to fire large artillery pieces. They were unwittingly grinding a keener edge onto my already keen class consciousness. As common soldiers we were forced to salute and address as “sir” a group of chinless wonders with double and sometimes triple-barrelled names. Frankly I damn near threw up every time I had to do it.

To illustrate this point, a couple of years previously my elder brother Michael – who had already won a state scholarship to Oxford University at age 17, and was a physically able man – was arbitrarily rejected by a War Office selection board to become an officer.

Their only possible reason could have been class, as he clearly had far more intellectual ability than the chinless wonders who were ordering me about two years later. We were from a mining family. I can’t see that going down well in the officers’ mess!

Contrast this class-based nonsense with the Russian Red Army of Lenin and Trotsky where the ranks democratically elected – and, if needs be, dismissed – their officers. Lenin and Trotsky’s army, forged by their genius in the cauldron of civil war and invasion by multiple imperialist capitalist armies, was designed not to oppress and to pillage, but to defend the democratic workers’ revolution – and ultimately end the need for armies and war.

To do this, the arm of the revolution charged with the harshest and most violent tasks needed the highest level of political and cultural education it was possible to give. Here lies the difference. To capitalism, the workers are expendable cannon fodder. But to Lenin and Trotsky they represented the only force on earth capable of changing the world.

Of course, as a result of the capitalists’ destructive actions in that war, and the tragic failure of some subsequent revolutions, Russia later degenerated into Stalin’s bureaucratic dictatorship. Many gains for the working class were lost.

Anyway, we were national servicemen and this was peace time. Imagine this class imposition in war time. These same nitwits would be empowered to send you to your death, based on nothing more than the bed they were born in.

With time I became increasingly disillusioned with the Labour Party, who talked incessantly about socialist policies but never implemented them. Their leaders occupied a halfway position, standing between bosses and workers. Sadly though, they were facing the wrong way, poised to head off any real socialist movement that would benefit the working class and challenge the power and privilege of the capitalists.

Both the Labour Party and trade union movement were – and still are – crammed with careerists looking for power and a cosy life. With a few heroic exceptions, they didn’t have a socialist bone in their bodies. They were on the gravy train and they were staying there, studiously blind to the plight of the working class.

In this climate I came into contact with a group of Labour Party members organised around the Militant newspaper. They were consistent and principled in their defence of workers, and unapologetic programme for socialist change. I saw immediately that these were a different breed. I felt myself on the same political wavelength, and I joined Militant in 1971 as full-time printer and designer of the newspaper.

In September 1971 we produced the first in-house Militant as a fortnightly publication. This was a very important date indeed because we were using our very own in-house print operation. The small premises in Hackney, east London, where we were housed, and the printing equipment in it, had been bought and renovated through enormous sacrifice by what were a very few people.

It’s important to bear in mind that the Militant had previously been produced as a monthly paper, by a small group of dedicated socialists who, against all manner of odds and hardships, kept the flame of Marxism burning in its pages. But it was being produced by commercial printers. This was costly and time-consuming.

Human and technical necessities were barely adequate. Our team gave all they had and then some. Almost miraculously the paper came off the line on time.

We were that era’s Leicester City FC of the left – charging through from an underdog position to champions of the league. We hadn’t cost a lot, we worked tirelessly for each other, we had a top-class management and we won the prize. We didn’t get a cup for it, but in the long run we know we got a whole lot more.

I mentioned earlier that I was a trained printer, so that aspect of the job produced few problems. We had acquired a very sound printing press. That press never failed us and never missed an edition until it was replaced by a larger and faster machine. We had the odd little mechanical problem but nothing we couldn’t fix. I think that, by the time it was replaced, I knew every nut and bolt of its being.

This is a very brief account of an epic period, which is more than adequately covered in Peter Taaffe’s must-read book ‘The Rise of Militant’. 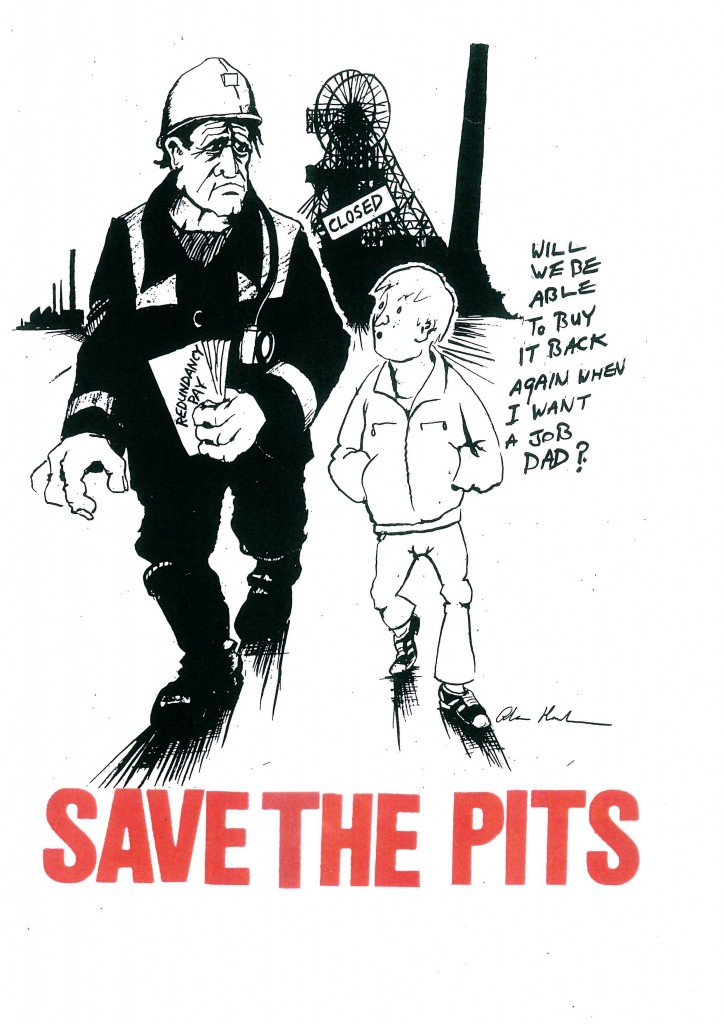 How did you start creating cartoons?

After a few editions the vital essential was to produce the paper in readable form and on time, which actually was about all we could manage. Within a couple of months our technical abilities developed to the point where we had the breathing space to stand back to appraise the paper.

My feeling was, because of my total inexperience of newspaper design, my work lacked professionalism, and I set out to raise the standard of the design in the printed material we were producing. Taking a look round at other newspapers, both left and right, both good and bad design abounded.

One issue stood out markedly: just about everybody had cartoons and we didn’t. After discussion with my editorial comrades, the broad feeling was that if I could produce politically sound and well-drawn cartoons, it was worth a try.

As my first efforts were done at home or on the bench whilst I was setting out the paper, the cost in time was zero. Up to that point I had never considered doing political drawings. I had no formal art training but had been interested in art since being a young lad.

Not being a very academic boy I looked round for something I could be good at, and for me it was art. It’s held a fascination for me ever since. So, you see, it wasn’t the first time I’d picked a pen up.

My comrades welcomed my initial efforts with enthusiasm. Without such a kind response I could possibly have given up. As it was I was enthused to carry on, and began to realise the power that a graphic idea can have, and that was the start of my doing them for forty years.

Do you have a particular method you work by?

I’ve explained earlier that I came from a shop floor background, not an art-based one. This was coupled with the hectic atmosphere in the area where we set up the newspaper office, where I did approximately two years of my early drawing.

This immediately imposed a method of working on me. It was one of eliminating all possible complication and endeavouring to get the drawing done at one attempt. It wouldn’t have been possible without a system of working. So wherever possible I would work as follows.

This may seem a bit pedantic and mundane, but actually it’s using down-to-earth systems and routine to capture something which is anything but mundane. It’s hopefully unique. I drew well over a thousand drawings working this way so, for me, it must have merit. By nature I’m not a methodical individual, so in this matter, forcing a system on myself is vital.

How about the drawing itself?

I said earlier that I always tried to do one drawing only. Obviously that was because of the time factor I could guarantee to work in. As soon as the image I decided on gelled in my mind, I would do a soft pencil sketch with definite positional composition and general movement established.

This preparatory work done, I could complete the job in ink, using the pencil outline as my scaffold, whilst retaining 90% creative freedom within it. Then remove the pencil lines. Job done!

What are your tools and materials?

Again, I kept it simple. Just pen, brush, Indian ink, pencil, rubber and medium cartridge paper. Exactly what you use doesn’t matter. It’s knowing the strengths and weaknesses of what you use.

As for coloured cartoons, some people like them, but not me. Although I have used some colour and enjoyed it, give me black and white any day. People may think it’s very skilful to use colour but in most ways I think black-and-white illustration is the more difficult.

Do you have any closing remarks?

I would like say how fortunate I feel I’ve been to have used any ability I have to attack the system I hate, rather than be exploited by it.

In closing, it’s important for me to stress that I’ve always wanted my cartoons to be part of our party’s work – i.e. part of the class struggle. True, I was responsible for the images and drawing them. But without the progressive attitude of my comrades, and the steadying hand of our Marxist position, I could never have maintained the accuracy of the cartoons’ political line – which is their reason for being.

Who is your artistic inspiration?

George Grosz. I never came near the perfection of his line in my work, but I got from him the vital need for simplicity in cartoons.

What right now is your favourite work by another artist?

Turner’s ‘Rain, Steam and Speed’. I don’t own a copy but I know it by heart.

Which of your own works has given you the greatest pleasure?

I couldn’t do it in one. My miners’ strike cartoons (1984-85), because striking miners routinely visited our premises, so their words and experiences went directly into my work, would be in our material within hours, and then end up back on the picket line.

Can you describe the arts world today in five words?

“The universal language of the human soul up for sale.” Is that five words?

If you had one political wish, what would it be?

The creation of the ultimate work of art, which would be a socialist world. 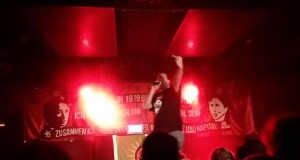 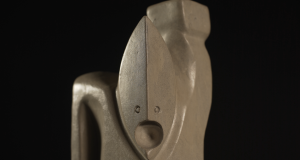