Home / Theory / What is capitalism? What is socialism?

What is capitalism? What is socialism?

Every artist wants to change the world – or at least the part of it your art can touch. You want people to know they’re not alone. You want them to live somewhere that looks better and sounds better. You want to leave your mark, however small.

We think that’s good. But no doubt you’ll have noticed it’s getting harder and harder to do. In fact, life is getting harder for pretty much everyone – except the super-rich.

There is mass unemployment and underemployment, but a culture of endless hours if you have work. Much of the work there is seems boring and unnecessary, yet there is so much in the world crying out for improvement. The rise of housing costs and overcrowding seems unstoppable – while in China, property speculators build entire cities of needless empty homes.

The riches of the richest are at an all-time high. Still they demand pay cuts, job cuts and privatisation for the rest of us. Sexism and racism are not only still with us – establishment politicians are actively encouraging them. War and terrorism blight millions of lives. Filthy air, violent winds and rising rivers and seas threaten us all.

The way society organises itself seems impossibly contradictory. It just isn’t working for 99% of the population.

Under capitalism, a tiny minority owns and controls all the ways of making wealth. Karl Marx, founder of modern, scientific socialism, called these things the ‘means of production’. The so-called 1% – in reality, a hundredth or a thousandth of 1% – owns all the rigs and refineries, the patents; all the supermarkets; it owns all the factories and labels and chains.

The 1% is the modern world’s ruling class. They control the vast majority of ‘capital’ – money invested to make more money – so we call them capitalists. But the capitalist class doesn’t actually make the wealth it lays claim to. That’s us, the majority. We sell our ability to work to these bosses in order to live: we are what Marxists call the working class.

The work we do changes bricks into houses, the sick into the healthy, and scripts into plays. The bosses sell our products and services on at a higher price, representing the value our work has added. But the working class only gets part of that back as wages and public services. The super-rich capitalist class keeps the rest as profit.

Of course, not everyone works for a boss. Some people, including some artists, work for themselves at least part of the time. But increasingly this is not a viable way to support yourself. Big businesses undersell you; the rising cost of living eats up your already-thin profit margin. You may not have to deal with a tyrant boss, but your living conditions are no better than those of workers. Often worse – you are less likely to have the security of sick leave, holiday pay, a decent pension.

Meanwhile, at the start of 2016, poverty charity Oxfam found that 62 billionaires own as much as the bottom half of humanity combined. Imagine what we could do with that wealth – and the processes which create it. The capitalists use it only to build bigger and more destructive profit machines.

To turn the value we make into profit, the bosses need a market to sell to. There is a finite number of consumers with a finite disposable income. The capitalists must compete to get ahead of each other. If they fall behind, they could go out of business, and lose their privileged lifestyles.

So they need to work us harder, and pay us less. The logic of producing goods and services for private profit is to do just about anything to maximise that profit – as insurance against other bosses stealing your share of the market.

Workers face continual exploitation under the profit system. The capitalists take our ‘unpaid labour’ – the value we produce for them over and above what they pay us – as profits. The working class, as a whole, cannot therefore afford to buy back all that it produces.

Furthermore, the blind rush for profit causes competing bosses to make more than they can sell – called ‘overproduction’ – leading to recession and slump. Increasing productivity by replacing labour with machinery eventually reduces the amount of profit bosses can steal from our labour in the long run, as well as the number of people with an income to buy products. And financial speculation – legalised gambling with ordinary people’s livelihoods as the chips – makes capitalism even more unstable.

There are many more contradictions besides. These include the unplanned, irrational character of the profit system; and the huge barriers to the development of society caused by private ownership of the means of production, and the limits of the capitalist nation-state. It all means permanent instability. Capitalism is inherently prey to crises due to its contradictions. And it’s the working class – along with the poorest in society, and middle classes – who pay for these crises, not the bosses.

To maintain this system of privilege for the few and penury for the many, the 1% visits every sort of evil on society. Bigotry and oppression aim to set us against each other instead of the capitalists. War helps one nation’s bosses secure resources, workers and markets over other nations’ bosses. And there’s just not enough profit in saving the environment to get even the minimum action needed to protect us.

Even closing community centres, slashing arts funding, forcing you to pay to train or to exhibit your work – even these are inherent to capitalism. They aim to reduce the tax burden on the ruling class. Progressive taxes can be a way for us to take back part – although not all – of the wealth the bosses steal from us as profits.

So what can we do to make things work for us? The good news is that the system itself opens up ways to fight it.

Capitalism draws people out of the country and into the towns and cities, thrusting us together in workplaces and housing estates. It gives us common interests to defend.

That is a danger to the bosses. Because the truth is that workers acting collectively have enormous power.

If the bosses don’t go to work, the worst that usually happens is everyone has a nicer day. If the workers don’t go in, everything stops. Yes, the bosses might own the system – but who really runs it?

This is the starting point for socialism. 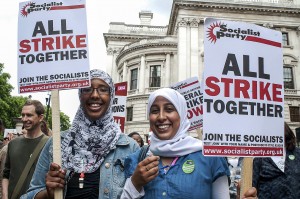 Socialism is a genuinely democratic, planned system where the decisive majority of the means of production, distribution and exchange are collectively owned. It’s not run by capitalists competing blindly to enrich themselves. The full value we create as a society – and the engines that produce it – are under our control.

We’d take energy, utilities, transport and banking into public ownership to keep everything running – and to slash their outrageous prices. Plus the octopus corporations that control modern life: in Britain, for example, only 150 firms control around four fifths of all economic activity. All of these companies together we call the ‘commanding heights of the economy’. Workers would take them, and would only pay compensation to shareholders on the basis of proven need. The 1% has had plenty off us already.

Taking the commanding heights off the bosses means workers can plan how and what we make and distribute to meet all of our needs. No more boom and bust. If we don’t need any more cars this year, we can move those workers to another useful job, instead of laying them off as an unprofitable expense.

That means jobs for all, free education and healthcare, and a massive expansion in public services.

Socialism doesn’t mean the state owns everything. You wouldn’t want to nationalise every pet shop and punk band. But we expect most small businesses would see the security of joining a publicly owned system voluntarily, given time. Until then we could ensure decent wages and conditions for their workers.

Socialism means much more free time. Having access to the huge productive resources the elite currently mismanages for unimaginable profit would allow us to greatly reduce the working week with no loss of pay. Machines could cut the amount of work we all have to do instead of destroying jobs. That means more time for artistic endeavour – both makers and spectators.

And under socialism, that free time would give us command over our own destinies for the first time.

A planned economy needs democratic control at every level to work, or it cannot adjust to the changing situation. Instead of an occasionally elected government in the pay of an unelected capitalist class, socialism would extend democracy to all parts of life. Workplaces and industries would be run by elected councils representing workers, product users and society as a whole. Ordinary people would have the power to sack and re-elect representatives at any point during their term. The democratic workers’ committees which keep essentials running during strikes are a small indication of the potential for this.

Genuine socialism would also need to be international. The only way to produce all that human society needs is to access all the talent and resources distributed around the globe. That is why we organise internationally. Of course, the change would have to start somewhere first. But any country or countries starting to act on a genuine socialist programme would inspire hope and enthusiasm across the world, making a voluntary socialist confederation possible.

This sort of change – a mass, democratic movement to reorganise society from bottom to top – is what we mean by revolution. We fight for socialist revolution. But fundamental to that is fighting for every possible improvement, however small, to the lives of ordinary people. Every campaign and every victory helps build our movement.

None of this can happen without organising. History teaches us the ruling class won’t just give it all up without a fight. Workers already organise trade unions in their workplaces, the first bases of power against the bosses. This is essential. But trade unions alone are not enough.

Workers are not all the same. We work in different industries, come from different cultures, have various different traditions and personalities, and group and individual interests. We are as different as snowflakes – but when we all fall together, we can change black to white.

Only a party can unite all these various different interests and experiences, learn from them, and forge them into a single programme of action. While building its own forces, the Committee for a Workers’ International also works to build such mass socialist parties around the world, parties totally unlike the capitalist politicians’ career machines. We have no big business donors, and don’t want any. Our representatives take only the average wage of a skilled worker. We believe it is essential to live in the conditions of those you represent.

Fighting for socialism is not easy, but the disasters capitalism is creating could destroy us if we don’t. As Marx put it, we have nothing to lose but our chains; we have a world to win. For artists and the arts, there are enormous possibilities.

But even achieving socialism, on its own, is not enough.

Perhaps sex makes you feel alone. Perhaps you find yourself stood at empty junctions and realise you’ve been watching the lights change for an hour. Perhaps you are angry that no one else will see this sunset that’s turning the power station cooling towers pink, or that drunk apologising to the tree she’s just shouted at.

Socialism can’t answer all that. Only art can. But only socialism can save the arts. And the fight for socialism needs you.

An introduction to the Manifesto: Towards a Free Revolutionary Art 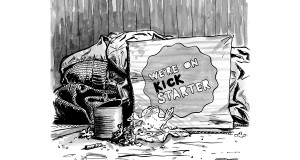 Is crowdfunding the future of art?